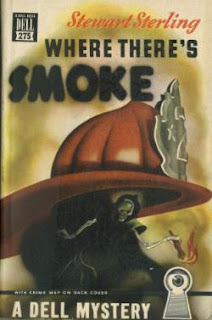 Where There's Smoke (1946) by Stewart Sterling starts off with Fire Marshall Ben Pedley "[rocketing] up Broadway at a screaming seventy with the siren wide open" and the pace never lets up until the final page. Pedley is on his way to fire that has set the Brockhurst Theater ablaze and trapped the luscious Leila Lownes--beautiful songbird and idol of thousands--in the building. Pedley arrives just in time to play hero by rescuing the fair Leila and to direct the firefighters to the source of the blaze. Leila had rushed into the building to save her brother Ned--but he was doomed even before the fire reached him. Someone had spiked his drink with denatured alcohol and even if he hadn't been toasted like a marshmallow he would have died anyway. But somebody wanted to make doubly-sure. Or maybe they hoped the fire would destroy the evidence of murder and his death would be written off as an accident.


Since the death is fire-related, Pedley claims jurisdiction to investigate and begins questioning everyone connected with Ned and Leila. One of the suspects doesn't take kindly to Pedley's direct questions and tries to pull strings to get the fire marshal removed from the case. Pedley's superior can't flat-out buck the orders from on high--but he can play the system to give Pedley time to investigate further. The marshal discovers that there are no tears being shed over Ned's untimely demise. It seems that Leila's brother cum manager was an over-bearing louse to everyone he came in contact with. Leila's friend and song arranger gives every appearance of being full to the brim with details but before Pedley convinces her to pour them out into his ear she becomes the victim of the firebug as well. The suspects are rapidly being disqualified (via the morgue) and Pedley suffers several near-escapes from death himself before this wild ride is over and he brings the murder charge home to the killer.

Stewart had his origins in the pulps and it shows. Pedley is a flashy, smart-mouthed investigator who doesn't always play by the rules and sometimes downright breaks them when "interviewing" a few of the more reluctant suspects. Action, excitement, and danger is 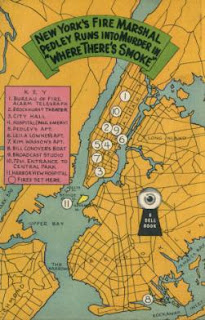 far more important than plotting and clues, but the adventure is a fun ride and there are enough clues to satisfy most mystery buffs (as long as you remember that Stewart is no Christie when it comes to tight plotting). One thing that is surprising in a writer with his feet planted firmly in the pulps is the moments of exceptional description--take that beginning, for instance. Stewart deftly puts the reader right in Pedley's fire marshal car and we feel as though we're zooming along the streets right with him--at breakneck speed. And the descriptions of the fire, the men working feverishly to bring it under control, and the victim are graphic--but not gratuitously so--and so competently done that we can almost feel the heat of the blaze. Descriptive moments like these aren't as abundant as one might like, but they go a long way towards compensating for the loose plot. An enjoyable, fast-paced read. ★★★

*********
With the map on the back, this fulfills the "Body of Water" category on the Golden Vintage Scavenger Hunt card.