The Case of the Seven Sneezes: Review 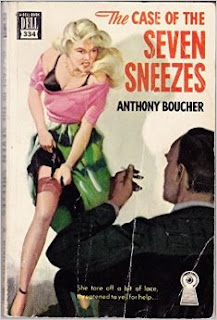 The Case of the Seven Sneezes (1942) by Anthony Boucher features his detective, Fergus O'Breen. Fergus calls himself "The O'Breen" and the red-haired Irishman runs a one-man detective agency in Los Angeles. He's a much softer version of the private eye fraternity who prefers to use sweeter, lighter investigative methods because he believes that "you catch more flies with honey than vinegar." Despite growing up without a mother and with an alcoholic father, Fergus has turned out pretty okay. He has varied interests from reading and cooking to football and classical music (especially Beethoven)...and one major allergy--to cats. In fact, the family tendency to this allergy manifests itself in the most peculiar manner: exactly seven violent sneezes whenever one appears or whenever O'Breen comes in contact with their hair. Thus the title of this particular adventure.

Seven Sneezes begins with O'Breen turning down the assignment to investigate a 25-year-old murder and ends with him solving not only that murder but a run of modern murders that seem linked to that horrible past event. Lucas Quincy, a business tycoon who owns a slice of just about everything in Los Angeles, comes to the private eye's office to hire him to investigate the murder of the maid of honor in his friend's wedding. A murder that took place 25 years ago. O'Breen wouldn't mind that so much (after all, Quincy is simply loaded with cash), but the tycoon insists that all results be given to him and him alone--and kept secret from the D.A. O'Breen isn't willing to risk his investigator's license, no matter how much dough is involved and turns the man down.

But fate has a way of directing things, and later that night O'Breen meets several of the key players in that previous drama--including faded movie queen Stella Paris. When O'Breen learns that Stella's cat has been killed, he allows her to convince him to join the 25th anniversary celebration gathering on Blackman's Island which will bring together everyone from that fateful wedding party. For you see, the maid of honor's murder was preceded by the killing of two cats and the private eye has a feeling that the murderer just might start in again. It looks like he's right when the island's handyman is attacked and left for dead and then the boatman who has ferried party-goers to the island is also coshed on the head and his boat sent motoring out into the harbor--leaving them all stranded on the island.

The party includes the happy couple, Horace and Catherine Brainard; Dr. Hugh Arnold, the best man; Stella, the maid of honor; Lucas, an usher; Alys Trent, the flower girl; and James Herndon, borther of the bride, as well as the Brainards' daughter Janet and Quincy's nephew Tom, both of whom were not members of the original group. When Quincy himself is murdered, it's up to O'Breen to discover the killer and find a way to get them all off the island without any more fatalities. But he'll have to determine how much is related to the past and whether there is any new business on the murderer's agenda first.

Fergus O'Breen is an engaging detective. Boucher created quite a character when he brought O'Breen to life and for the most part I thoroughly enjoyed watching the private eye do his stuff on the island. The mystery, however, is quite convoluted and the twists and double-twists and triple-twists make it a little hard to follow in the wrap-up. The reveal of the culprit doesn't bother me so much--it's easy to see the reason why s/he did and is the logical villain, but the method Boucher chose to get the reader to that conclusion was a bit much and tying the past to the present wasn't quite as tidy as it could have been.

Overall, an entertaining read and I'll certainly be interested to read the other two O'Breen novels that I own. I'll be hoping for a more solid (and satisfying) ending for those. ★★★

I read The Case of the Seven Sneezes years ago, but remember loving the scene in the hallway where several characters were singing “Three Blind Mice” to a frightened man, who had locked himself into his room, in order to convince him that they were not a sinister cut-throat. Don't remember much more about the book except that it was good and worthy of three (or more) stars.

TomCat: Thanks for stopping by! Yes, the "Three Blind Mice" scene was good and Boucher does do a good job overall. I just wish that ending hadn't been overly convoluted--might have given it four stars if the ending had been better.