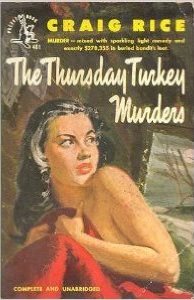 The Thursday Turkey Murders (1943) is the second in a trio of books by Craig Rice (with help on the third by Ed McBain). These are screwball mysteries starring Rice's photographers with a penchant for landing in the middle of murder, Bingo Riggs and Handsome Kuzak. Bingo and Handsome, late of New York, have decided to head west to seek fortune and fame in Hollywood. Handsome has the added talent of being able to remember everything he has ever read (especially in newspapers) which tends to help the duo get themselves out of more than one jam.

On their journey west, they get sidetracked in the town of Thursday, Iowa when they accidentally run over a prize turkey. Bingo hops out the car to haggle with the farmer over how much the bird was worth and before you know it, he and Handsome seem to be the proud owners of 500 turkeys with hopes of turning their $1,200 investment into $5,000 with just a few weeks of work. The fact that he and Handsome are city boys who don't know one end of turkey from the other doesn't really bother him.

But the boys really don't seem to have much time for tending turkeys what with being accused of murdering Gus (the fellow they bought the turkeys from) as well as there being five escaped convicts, a disappearance, a second murder, links to a 15-year-old bank robbery--with the money rumored to be hidden somewhere in Thursday, and a lovely dark-haired beauty who keeps popping in and out when you least expect it. Even though Bingo and Handsome don't know what's going on half the time, they still manage to help the local sheriff round up the bad guy and dig up the missing dough. Which results in the boys coming out about a thousand dollars ahead (even if those turkeys weren't Gus's to sell).

It's quite possible that I just wasn't prepared for Bingo and Handsome's particular brand of screwball this time around. Last February (almost exactly a year ago), I found these two unlikely detectives to be a lot more entertaining in The April Robin Murders. [Yes, I know I'm reading these in reverse order--I take 'em as I can get 'em.] It's also possible that Ed McBain's assistance with the unfinished work made Robin more appealing. Regardless of the reason, I wasn't quite as interested in the shenanigans going on in Thursday. The boys seem to be up to their usual tricks and innocently getting themselves in the middle of crime and murder. The sheriff is a pleasant fellow and makes and interesting foil for our two photographers. It's even clever how the turkeys get worked into everything...but all the turkey feathers in the plot just couldn't tickle my fancy quite enough. ★★ and 1/2.

This counts for the "Brunette" category on the Golden Vintage Scavenger Hunt card as well as another entry in Rich's 1943 edition of Crimes of the Century. If you've got a mystery from 1943 to share, come join us!

Labels: Cloak & Dagger, Crimes of the Century, How Many Books, Mount TBR, My Kind of Mystery, Pick Your Genre, Vintage Mystery Challenge, Where Are You Reading, Wild Goose Chase