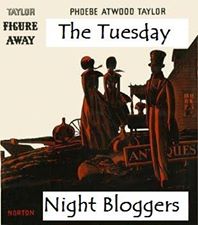 The Tuesday Night Bloggers have been meeting now for several months with a group of us who are interested in golden age detective writers. We started with Agatha Christie back in late September and October and have now found ourselves looking forward to April and Phoebe Atwood Taylor--or Alice Tilton, as she sometimes liked to call herself. Curtis over at The Passing Tramp has been collecting our efforts month. I mistakenly thought that I would have way more time in April to do indepth reviews (Silly, Graduate Administrative Assistant! It's graduate admissions time.) But--I wanted to join in one more time, so I offer up my review of Death Lights a Candle which I read back in 2006:


I had the great pleasure of borrowing the Pocket Book edition of Asey Mayo's second mystery outing from my good friend Richard. I was sorely tempted to run off with it....regular readers of my blog will remember how much I love those pocket-sized editions of classic mysteries. I was good and resisted temptation. But the story would have been enjoyable no matter what form the book came in. I have fondness for the "Codfish Sherlock," as Asey has sometimes been called. His down-to-earth detective work generally satisfies. And I remember it doing so in this case.

Prudence Whitsby and Asey Mayo team up once again to get to the bottom of a murder on Cape Cod. And there is no shortage of trouble around that March. Prudence accepts an invitation from Rowena Kible to the Cape in order to give her a break from Boston. They are then summoned to join a house-warming party across the street--a new mansion owned by Adelbert Stires. The party no more than gets started when some serious snow begins to fall. And where is their host? The small group of guests, their servants, and local handyman, Asey Mayo, are all trapped by the snowstorm--cut off from the world outside. But then Bert Stires manages to show up on foot. He is wet and cold and more than 24 hours overdue from when he left Boston, but no one thinks to ask where he's been or what happened to him. They will have missed their chance, because the next morning he is discovered in his locked bedroom, dead. The doctor proclaims death by poisoning, probably arsenic. But almost everyone is found to have arsenic among his or her possessions. And there are just about as many people with reasons to want Stires dead.
It's then that Asey takes charge of the investigation. Since his first outing in The Cape Cod Mystery, Asey has been elected as sheriff and he now has a badge to give him more authority in his labors. The snow piles up deeper and deeper and so do the questions. How was the arsenic administered? And by whose hand? As the book's title would suggest, there is a candle involved and Asey must decide how that light figures into the mystery before he can bring the crime home to culprit. ★★★★

**********
I am happy to say that since borrowing Richard's copy, I have managed to find my very own copy of the Pocket Book edition. I'm no longer tempted to wander down to his office in the English Department and commit a bit of petty thievery....
Posted by Bev Hankins at 7:02 PM

This one has a resemblance in a key aspect to an R. Austin Freeman mystery published a few years earlier. Wonder if PAT read that one? Snow is always fun too, during a murder.

I have a entire shelf-ful of Taylor's books under both her writing names but I've read exactly one. And it was a Tilton book. I keep meaning to read about Asey Mayo. Never have. Les Blatt says this one has "elements of 'noir' to go along with a somewhat grimmer plot." I think he misuses noir as do most people, but that tag is enough to arouse my interest. I'm planning on reading this book as my introduction to Asey Mayo's sleuthing sometime in May or June.

What, no star rating? Sounds like a three to three and half. Maybe a four?

John: I really enjoyed this one. I have to take all of Atwood's work (under both names) in small doses--there's such a thing as a saturation point with her books. I'm pretty sure I was influenced just a bit on this by it's being a pulp-size book and that I got to borrow it off of my good friend Richard when I read it.