The Case of the Black-Eyed Blonde: Review 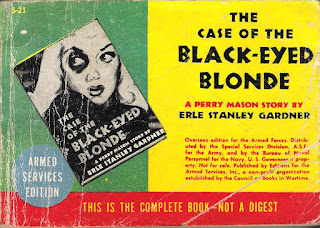 Diana Regis was a beautiful blonde who showed up at Perry Mason's office wearing nothing but a coat, a negligee, and a shining black eye. Her employer's cad of a stepson made one too many advances to her and she resisted one too many times and he, believing that if you socked a female good and hard she'd fall into your arms, had done just that. But she didn't. She went back to her rooms at Jason Bartsler's home, ran into more trouble, and ran out of the house in barely enough to be respectable. All she wants Perry to do is get her owed salary and all of her things. But things get far more interesting fast.

Perry reaches a settlement with Bartsler, but the ink's barely dry on the deal before Perry and Della discover a dead body. And then it isn't long until they get involved will all sort of people who are, unfortunately, also of interest to Lieutenant Tragg and Sergeant Holcomb. Like Jason Bartsler, a mining tycoon who wants Perry to help him dig up his past. And Frank Glenmore, Jason's friend and right hand man, who prefers digging up the present. And Carl Fretch, the caddish step-son, who's main object in life is to make every dame bend to his will and who comes as baggage with Jason's second wife. And Jason's second wife whose primary interest is digging gold--enough for her and her darling boy. And then there's all the blondes--the one with the black eye, the one with the missing Barstler grandson, and the one who winds up shot and killed.

Holcomb doesn't care much for Perry Mason. In fact, he goes out of his way to make things as difficult as possible--even going to the lengths of arresting Perry and Della. But leave it to Perry to get to the bottom of things with the help of Della and Paul Drake. Poor Paul. Perry gives him so many assignments that he doesn't have time for a decent meal until the end of the story.

Not the best Perry Mason story I've read, but the not the worst either. The back story about Jason Bartsler's missing grandson is interesting and I did enjoy the scenes where all Paul Drake wants is a good meal and Perry keeps telling him to munch on chocolate bars. But the obstructive nature of Holcomb is annoying and the clues are a little sparse on the ground. ★★★

For me, there is no bad Perry Mason book. Love him.

Until it was appropriated by John Banville for his ersatz Marlowe novel, a title like that it could only be Perry Mason! Not read this one, I don't think, though I probably saw the TV adaptation with Raymond Burr

Ryan: I have to take Gardner in small doses. I like him better than I used to, but still not an author likely to make my top ten list.

This sounds pretty cool, almost noir. I like Perry Mason too, but never read a book only saw the show.

It's a good detective story. But it is more dramatic than the Mason novels usually are and the references to WWII are extremely interesting. The lingering fallout of the Pearl Harbor attack is still being felt with the Bartsler family affected by the loss of an only son. Loss and grieving bring out not only the better angels of human nature, but the crooks and scam artists and other lookers out for number one. Material life has been affected too. Paul Drake doesn’t want Perry to drive his car because Mason’s speeding and sharp turns will cause too much wear and tear on his tires, which are hard to replace due to rubber shortages. Rainwater is caught in cisterns so it can be used as a source of soft water for doing laundry and washing one’s hair. How would we know these things now if Gardner didn't unwittingly capture them?