From the pen of the author who brought the world Dr. Fu Manchu, comes a tale of adventure and romance with a dash of mystery and intrigue. The story begins in New York City but the heart of the mystery lies in the burning sands of Egypt. Lincoln Hayes, wealthy eligible bachelor, comes into possession of a portion of an ancient manuscript which seems to hold the secret of an ancient lamp with an extraordinary source of light on the same evening he makes the acquaintance of a mysterious Egyptian, . Hayes owns a prominent lighting company and hopes his associates, Captain Rorke and Ulrich Stefanson will be able to recreate the process. Before his experts can complete an examination of  and fully decode the document, there is a flash of blinding light and the document and notations made by Stefanson disappear along with the Egyptian, Mohammed Ahmes Bey. Stefanson, however, possesses an incredible memory and begins reconstructing the documents and notes. Rorke's memory is for a map that leads to the original source of the lamps. And Hayes decides that the group should head to Egypt to find more information. 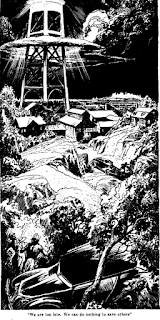 Hayes's secretary will be hypnotized and the documents Stefanson puts together from memory will also be stolen. Then Stefanson's memory will be wiped while a shadowy bat-like form haunts their dreams and follows where they go. Agents for a rival company are out to beat Hayes to the secrets and the Bey's men are also on the trail. There are mysterious doings at a hidden fortress in the desert and a bang-up finish back in the States when the wrath of the gods is visited upon those who try to apply the wisdom of the ancients without sufficient wisdom of their own.

Rohmer is so well-known for his Fu Manchu, "yellow peril" novels that one expects to be stepping into a world where racial stereotypes abound when opening a Rohmer novel. Surprisingly, there is little of that going on here--I won't say there isn't any, but prejudices are not in full flower as they have been in my previous Rohmer experiences (The Golden Scorpion and The Insidious Dr. Fu-Manchu). Perhaps it is because there is no super villain looking to crush our heroes. This is more of an adventure featuring a bit of (mild) industrial espionage and efforts by Bey to keep ancient wisdom out of the hands of those who aren't ready to use it.

But Rohmer does keep up his standards in the action adventure arena. He's still your man if you're looking for fast-moving, pulpy fun. And if you're into beautiful, mysterious, women who are strangely enslaved to the mysterious shadow figures, but have a fondness for our gallant heroes while alternately helping and hindering (according to the master's bidding), then he's got the goods. It makes for an exciting story with little mystery to unravel, but a good read for a lazy summer afternoon.

Just a couple of quibbles--our gallant hero in this outing, Lincoln Hayes, is not a particularly likable fellow. He's not horrible or mean. He's just kind of blah. No real personality to speak of through most of the story and he speaks in a very terse speech pattern that tends to leave out the subjects in his sentences. The speech pattern doesn't help the lack of spark. Fortunately his associates make up for his deficiencies. 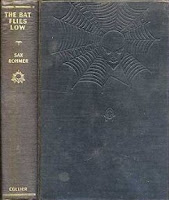 Also, how many times do items have to be stolen or destroyed and shadowy figures have to be eavesdropping and/or watching before Hayes and company figure out that just maybe the important documents need to be kept locked up? It seemed like it would have been easier to just put the things on a table with a big neon arrow pointing down and words flashing "Secret Documents! Ancient, Irreplaceable Artifacts! Please Steal!" I realize that we wouldn't have as many plot "twists" without them--but I see little point in making a man have a phenomenal memory, letting him use it, and then finally wiping it clean just to ensure that the documents are irreplaceable. Just have the things stolen once and everybody have a mind like a sieve and be done with it....

Overall, a fun adventure for those willing to suspend their disbelief and go along for the ride.  ★★★

Labels: 100 Plus, 52 Books in 52 Weeks, Genre Decades, How Many Books, Mount TBR, My Kind of Mystery, R.I.P. Challenge, Travel the World, What An Animal

I know the Fu Manchu novels well. My dad loved them. That alone draws me into this one. Great review!

Do you know, I'm not sure I've ever actually read a novel by Rohmer - rather curious now, with or without Fu Manchu!

I have almost every single Rohmer novel, but I've not read this one. I think I get it mixed up with BAT WING which I have read but it's never been a favorite. Not as bad as the horrible SHE WHO SLEEPS (do yourself a favor and skip that one!) but fairly middling. So many better books by him. When I read Rohmer I want lurid thrills so I tend to like the more outlandishly plotted ones: BROOD OF THE WITCH QUEEN, GREEN EYES OF BAST, DAY THE WORLD ENDED, and most of the early FU Manchu books.

John: Hmmm. I have Brood of the Witch-Queen, Grey Face, The Dream-Detective, and....unfortunately, She Who Sleeps.

This one was fine...fairly good adventure and thrills. It just bothered me about that whole perfect memory thing. On one level I get that we were proving what powers those who have connections to the ancients have...but I don't think we had to prove it repeatedly.

SHE WHO SLEEPS has one of the most ridiculous endings of all of Rohmer's books. Made me want to throw the book at the wall and then jump up and down on it. Funny thing -- long before I read SHE WHO SLEEPS I had seen Charles Ludlum's hysterically funny play, The Mystery of Irma Vep, that parodies Victorian and Edwardian era thrillers. He makes fun of everything from REBECCA (admittedly not from either era but with that kind of feel) to werewolf movies to the works of Haggard and Rohmer. And it's loaded with literary allusions and movie references. Very fun! In it there is a character called "She Who Sleeps But One Day Will Wake." The audience roars with laughter when her secret is revealed. Turns out she was not a parody of Haggard's character Ayesha as I originally thought but a direct lift of the ending of SHE WHO SLEEPS! And I only realized the connection between Rohmer's book and Ludlam's play reading the final pages of SHE WHO SLEEPS almost a decade later.

That does sound fun, John!