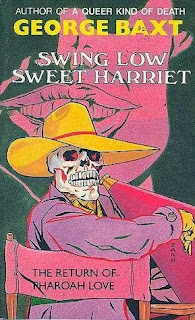 Swing Low, Sweet Harriet (1967) is the second entry in George Baxt's series with Pharoah Love and Seth Piro. It's an over-the-top, campy detective novel based in the world of former vaudevillians, long-forgotten silent film stars, and over-the-hill 30s-era musical crooners and hoofers. The cast of crazies includes Sam Wyndham--former cameraman and current chief of a Film Society hosting a memorial to the era, Sweet Harriet Dimple, Flora and Fauna--the Fleur Sisters, Madeleine Cartier, and "Miss Breast Stroke of 1928" Zelma Wave. All of these beauties from the past are hoping for a comeback in the 1960s film and/or television world, but the stars seem to be aligned against them.

Pharoah Love is the most annoying detective ever. Sure, he's an important figure on the detective fiction landscape--not just the first gay detective, but a gay African American detective. But my opinion of him has nothing to do with his sexual preferences. I don't care if he likes men or women or both or aliens from another planet or all of them in one grand orgy--why can't the man say one complete sentence with using "cat"??!! Everybody, absolutely everybody is a "cat"--"Seth cat," "detective cat," "murderer cat," strangler cat," "twin cats," "baby cat," and so on ad nauseum. Seriously--I'm a barely from the 60s girl (1969 model)--did people really talk this way? All. The. Time?

And, honestly, I don't see that he does much in the way of detecting here. Most of what he accomplishes is off-stage. He contacts his pals in various places for the low-down on various characters and that's about it. Seth does most of the "detecting" through virtue of his interviews for the book he's supposed to be writing.

Primarily what we have here is a great big, chaotic, campy mess. Lots of big spectacle--which I suppose is a nice send-up of the Busby-era musical spectaculars--but not much in the way of detective entertainment. We have Sweet Harriet (who's most definitely NOT, by the way and that's no spoiler--you know that from the moment you meet her)...anyway, as I was saying: We have Sweet Harriet tap dancing her way down the streets of New York and in and out of all kinds of places. We have out-of-date stars running around in out-of-date glamorous outfits demanding that everyone give them the recognition they're due. We have these luscious ladies of the cinema getting thoroughly hammered and screeching at each other in public places or trying to throttle Pharoah or yelling at the top of their lungs in their hotel rooms at people who aren't there. We have the mystery "child" with the annoying speech impediment (which serves no plot purpose that I can see...it's there purely for annoyance value). And, of course, we have Pharaoh (see paragraph above).

"Get them inside," the attorney pleaded with the policewomen. "It's turning into a three-ring circus."

If anyone has reached this point of the novel (next to last page) and hasn't already felt like they were in the middle of the third ring, then they haven't been paying sufficient attention. It's a three-ring circus that's missing its ring master. That's what it is.

Of course, there are those who disagree with me, so your mileage may vary. The book has an average rating of 3.86 stars on Goodreads and I found this bit in The Independent's obituary for George Baxt back in 2013:

[on A Queer Kind of Death] The book was instantly acclaimed. "I didn't know how outrageous that book was. It really shocked the pants off everyone," Baxt said. The second book featuring Pharoah Love, Swing Low, Sweet Harriet (1967), was considered even better, with Busby Berkeley musicals among the targets of the author's satire.

Personally, I give it ★ and a half--rounded to 2 stars on Goodreads. The very best part of this book from my point of view? The cover with art by Nicky Zann--it was one of the primary reasons I picked this book up at the Red Cross Book Fair last year.
Posted by Bev Hankins at 1:06 PM

I'm writing an essay on Baxt and his depiction of gay life in the trilogy of Pharaoh Love trilogy for a book Curt Evans is editing. Re-reading them as a 50+ year old man I still found them savagely funny in parts. Coincidentally, I finished re-reading SWING LOW... only a few weeks ago.

The love affair with aging movie stars, the bitchiness, the selfishness, the making fun of everything from Mama's boys to pretty boys -- it's all taken from the trunk of old school gay gags. Reading a Baxt novel is like watching an early John Waters movie or going to a drag club and listening to a has-been drag comic doing insult jokes. The whole book is sort of a homage to Grand Guignol style movies about old hags like Whatever Happened to Baby Jane? and the rest of those Bette Davis and Joan Crawford movies where they played wacked out murderesses. It's filled with in jokes about those movies as well as movie mania and movie trivia. I first read these books when I was a teen and was a movie addict even then. I thought the books were hysterical and so naughty. I felt like I was getting away with something forbidden when I read them. I still think some of this is very funny, while some of it, I have to agree, is just annoying nowadays. Baxt can be so nasty and seems to hate some of his characters and make his them so absurdly selfish I can understand why he'd be a real turn off to most readers.

Did you read the first one -- A QUEER KIND OF DEATH? It's fairly ruined if you read this book first as the ending to the first book is revealed over the course of SWING LOW, SWEET HARRIET. I'm tempted to tell you the super-insane ending to the third book (TOPSY AND EVIL) since I'm sure you'll never read it, but I'll restrain myself. :^)

John, no, I was bad and didn't read the first one first. You know, it's funny, I do like camp in general and I might have had a greater appreciation for this one if Pharoah had just laid off that "cat" business. I don't know why that grated on my so much--but it did and I think it soured my view of the rest of the campy bits.

And--by dangling that "super-insane ending to the third book" in front of me and then restraining yourself from telling me, are you trying to tempt me into reading it? ;-)