My Blog Name in Books 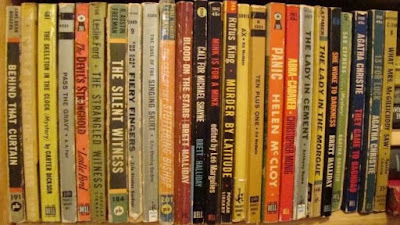 Over at In Search of the Classic Mystery Novel, the Puzzle Doctor put up this explanation for a bookish meme that he has posted:


"Well, you can blame Cleopatra Loves Books for this one…


Apparently My Name In Books was a meme that went around over the summer (and over my head as well – never noticed it) but I thought I’d give it a go – namely spelling out my name in the titles of my favourite books. Now, there’s an obvious problem with a name like The Puzzle Doctor – can you spot it? But nevertheless, I thought it was worth a go. But try as I might, the only thing I could come up with for Z was Zzzz for any of the Brother Cadfael books. But this is a friendly blog, so I couldn’t possibly say that. Instead, I thought I’d do My Blog Name In Books."


And then The Invisible Event followed suit with


"It got me thinking; I’m sticking to a self-imposed crime focus on this blog, but it might be nice to acknowledge the SF and others that have played significant roles in my reading life.  And so I give you…My Blog Name in Books"


And now I've decided to join in. I had already responded to the Doctor in a comment--with mystery book titles only. But now I shall post that list--with a bit of explanation--as well as a second which will feature the best of the rest that follows The Invisible Event's example.


First up, my blog name in all mysteries. It was a bit of a challenge because I set myself the task of using only books that have earned four or more stars on my rating scale. I've linked my reviews for those books that have been read since I began blogging.

Murder Stone, The by Charles Todd (a gripping historical mystery)
Yellow Room, The by Mary Roberts Rinehart (a tricky mystery with a bit of romance)

Relic by Douglas Preston & Lincoln Child (one of the few thrillers you’ll find on my list)
Estate of the Beckoning Lady, The by Margery Allingham ( lovely period piece with Albert Campion)
Abominable Man, The by Maj Sjöwall and Per Wahlöö (a perfectly paced police thriller)
Death in a Tenured Position by Amanda Cross (I do love an academically-inclined mystery)
English School of Murder, The by Ruth Dudley Edwards (see above)
Rules for Murder by Julianna Deering (written in the Golden Age style--it sets out to break all the rules)
Strong Poison by Dorothy L. Sayers (my favorite Wimsey novel)

Bodies in a Bookshop by R. T. Campbell (entertaining characters, brisk dialogue, murder & books!)
List of Adrian Messenger, The by Philip MacDonald (classic death by list novel)
One Step Beyond by Henning Mankell (brilliant, complicated police procedural)
Champagne for One by Rex Stout (Stout at his best--all the characters shine)
Key, The by Patricia Wentworth (begins like a spy thriller, but Wentworth never really takes us out of the cozy realm)

The mysteries listed above aren't necessarily my top fourteen crime novels of all time. They are just the top novels with a beginning letter that helps spell my blog name. All are very enjoyable and highly recommended.

And now for the more generalized list--although there will be a lot of science fiction. SF had a huge influence on me from about age 11 through 21:

Martian Chronicles, The by Ray Bradbury (one of my favorite SF authors of all-time)
Yellow-Lighted Bookshop, The by Lewis Buzbe (A delightful little book about books. And booksellers.)

Robot Visions by Isaac Asimov (a collection of landmark stories by SF legend, Asimov)
Excellent Women by Barbary Pym (humorous slice of British life in the 1950s)
Anna Karenin by Leo Tolstoy (a favorite literary classic)
Dune by Frank Herbert (another SF favorite)
Elegance of the Hedgehog, The by Muriel Barbery (A beautiful and elegant book which asks important questions about what is beautiful in life)
Royal Ghosts, The by Samrat Upadhyay (emotional, touching stories about life in Nepal)
Shatterday by Harlan Ellison (terrific collection by a master storyteller)

And once again I realize how the initial letters limit the books I can highlight. So many of my all-time favorite novels start with letters that do not appear in my blog's name....

Great work, Bev, really pleased to see that someone got as much fun out of this as I did. I reckon there's also another list (or five) in "Books That Don't Spell Out My Blog Name But Are Still Super Important To Me", but I think that may be too indulgent for me to get away with...!

I knew you would have no trouble with this one Bev with your vast repertoire - brava!

Loved all the Amanda Cross books...so sad that she had decided that life after 70 is not worth living - I could tell her that it is!!!

I've often done "Books that don't spell out anything but are super important" lists...and I'm always up for doing another. :-)