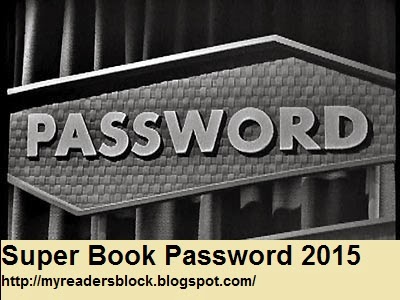 Well, it's supposed to be time for the fifth round of Super Book Book Password. But interest seems to be lagging. Ryan jumped in for a correct guess on the first of my two Musical Group Passwords ("The Chieftains") but after a couple of early guesses no one captured points for the second ("The Hollies"). Since the first two rounds, I've been the only participant offering up Passwords for guessing....at this point I'm prepared to throw in the towel on this particular challenge and call it officially finished. If anyone has an interest in another round, I'm open to hosting (and will replace this post with a Sept/Oct link-up). I'm even willing to go off the proposed schedule and offer an open-category round (or two). If you'd like to pick a Password Category and secret password to guess, just send me an email at phryne1969 AT gmail DOT com. If I have no takers by the end of September, then I will call the challenge closed and award the prize to our current point leader.

Here are our current point totals:

Bev (hostess, playing for fun): 460 points [reading those books and giving out clues really adds up!)

Oh, Bev, I'm so sorry this challenge isn't working out. I so wanted it to! I couldn't get the Hollies.

But the real problem is that the books that I've read just didn't seem to come together to produce something in the given categories, but I would need some time to consider what my proposed Sept-Oct reading list is before being able to suggest one.

Given that my imagination is failing me, I'm all for awarding Ryan the prize. He's so far out in front that I'd be hard pressed to catch up anyway ;-)

Maybe we could try again in the future. With better planning, I'd have to be able to come up with something.

Thanks, Debbie. I may rethink how I've set it up. Not sure what I would change....I do know that I am going to cut way back on the challenges I sign up for next year. So, an overall challenge overhaul is coming here at the Block....