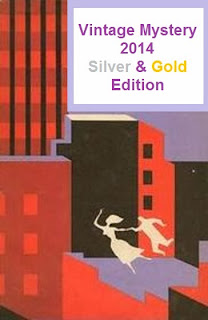 I have at last got two bingos for the Gold card.
They are the first row from the top and the fifth row from the bottom.

Since my posting last month I have completed the following squares:

Read one book with a colour in the title:
Black land, white land (1937) by H. C. Bailey
I found this a rather disappointing book, with a very dull narrative style.

Read one book with a spooky title:
The Dreadful Hollow (1953) by Nicholas Blake

Read one book already read by a fellow challenger:
And then there were none (1939) by Agatha Christie. I believe Hannah@bookinginheels read this one in March.
Excellent read. One of my favourites so far.

Read a book by an author you've never read before:
Who killed the curate? (1944) by Joan Coggin
Delightful amateur detective who is forever getting the wrong end of the stick.

Read one academic mystery:
The Widening Stain (1942) by Morris Bishop

Read one book with a professional detective:
Murder at Shots Hall (1945) by Maureen Sarsfield
Another excellent mystery.

Read one book set in England:
The Blotting Book (1908) by E. F. Benson
Unfortunately this was another disappointing novel, despite being very well written. The murderer was just too obvious and the clues too explicit.

Read one book written by an author with a pseudonym:
Head of Traveller (1949) by Nicholas Blake

However, I was wondering if anyone had any good recommendations for books which would qualify for a book that features food/cooks in some way and a book set in the entertainment world?

For the entertainment world--Ngaio Marsh has a few that are set in the theatre (or centered on artists or actors)--Vintage Murder (1937), for example. There is also The Case of the Gilded Fly by Edmund Crispin (1945); A Puzzle for Puppets by Patrick Quentin (1944); Death on the Aisle (1942) or Death of an Angel (1955) by Frances & Richard Lockridge, and Made Up to Kill by Kelley Roos.

Also, I recently read Malcolm Sage: Detective by Herbert George Jenkins. I'll totally accept food/cooks in the title--even if sage itself doesn't figure in the mystery.