It's Vintage Mystery Sunday and time to spotlight another classic mystery that I read and loved before I began blogging and reviewing every book I read. A lot of these books come from a time when I was a reader....period. No journaling, no notes. I kept a list of what I read and assigned a rating, but that's it. So quite a bit of my comments will be based on what my rapidly-aging, sieve-like memory will produce for me...that and the little jolts I give it by reading descriptions from the back of the books, the library website, Amazon, etc. I just want to take a moment each weekend and introduce you to some vintage mysteries that you may not know....or, perhaps, remind you of some golden oldies you may have read in the past. 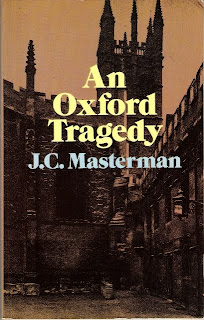 This week's featured mystery novel is An Oxford Tragedy by J. C. Masterman. Like so many of the mysteries that have an academic setting, An Oxford Tragedy is written by a scholary man. J. C (Sir John Cecil) Masterman was a well-known academic, sportsman and author. He was a don at Oxford University as well as serving as the chair of the Twenty Committee, an organization which controlled British double-agents during World War II.

Masterman wrote his first mystery, the one featured today, in 1933. It takes place at the fictional St. Thomas's College in Oxford. The dons of the college are enjoying some moments of fellowship in the Common Room--indulging in port and cigars and listening to Ernst Brendel, a visitor to the college, discuss law (his profession) and crime and detection (his personal interests). It isn't long before Brendel has a chance to put his amateur skills into practice. An unpopular tutor is found shot to death in the Dean's lodgings and the police are baffled. There doesn't seem to be any clues nor any definite motive for the crime. After all, if everyone who was unpopular were to be shot.....

It is Brendel who is perceptive enough to discover the tangled motives that can drive the academic mind and to uncover the passions that can fuel the decision to kill. He uses psychology in much the same way Hercule Poirot does. There is no mention of "little grey cells," but the reader knows they are hard at work. Brendel also has a way of getting the suspects to talk and soon is able to discover the murderer through a psychological process of elimination. The story is much about atmosphere and less about plot than other mysteries.

Masterman does a wonderful job with the psychology of the crime and in creating the academic setting. The reader really feels like she has been to Oxford and hob-nobbed with the dons. This book was one of the first "academic mysteries" that I read. It is said that Masteman helped pave the way for writers like Michael Innes and Edmund Crispin. That is certainly true in the case of my reading journey. Being exposed to An Oxford Tragedy helped to start me on my hunt for other mysteries set not only at Oxford or Cambridge but at just about any academic institution. It is a fine British mystery and an excellent example of the mystery set in college.