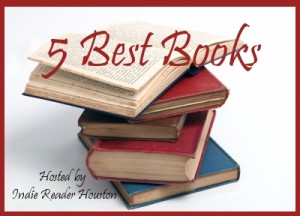 The 5 Best Books meme is hosted by Cassandra at Indie Reader Houston.

This week we are asked to list our Five Best Books: [With] Horrible Titles. Good titles grab your attention. They make you want to pick up the book and see what it's about. Bad titles...if you haven't been told that the book is fabulous, you probably wouldn't touch it with a ten-foot pole. Bad titles may scream Boring! at you....or Ick! And, of course, like so many things in the book world, one person's bad title may be someone else's favorite. So, without meaning offense to anyone who thinks these titles are the all-time greatest and in no particular order, I give you bad titles for books I've actually read.....

1. Injury Time by Catherine Aird. Sounds like someone has had an accident in the sporting arena. Actually, this is a murder mystery. I'd say somebody is getting a little bit more than injured....And I'd be right. I read this some time ago. It was decent, but the title wouldn't have grabbed me if I didn't like Aird.

2. Fire, Burn! by John Dickson Carr. I only picked this one up because it was by Carr. Otherwise, that title would have done nothing for me. Unfortunately, the title was a pretty good indicator. The story did nothing for me either. Which is unusual for Carr.

3. Book by Robert Grudin. No? Really? If I hadn't heard good things about this satire, there's no way this would have leapt off the library shelves and into my hand.

4. The Curse of the Giant Hogweed by Charlotte MacLeod. I love the Peter Shandy mysteries. Sometimes they're a little off-the-wall, but they're funny and light when that's what you want. This one is just bizarre. Like the title.

5. Oh! Where Are Bloody Mary's Earrings? by Robert Player. I don't remember how this got recommended to me. But it did. I read it many moons ago. Don't remember a darn thing about it. Maybe the title would have been a clue that it wouldn't be all that.
Posted by Bev Hankins at 4:17 PM

I have to say, Bev, these are pretty awful titles. :)

I haven't read any of them and something tells me I won't anytime soon.

I picked Desi Arnaz's title for his autobio: A BOOK as the worst title. I see you've got a similar title on your list.

It distresses me that mystery books tend to have such terrible titles. I like mysteries. I hesitate to pick them up, though, because the titles are so very odd.

I'm curious, what is BOOK about?

@Ben: An avant-garde comedy--first novelist Grudin takes up a plot about a nasty tempest in a college English department, but his real preoccupation is with language and the reflexive nature of literary forms; his novel is a burlesque of itself and of all bookishness. When English professor Adam Snell vanishes from the University of Washagon, his stuffy, jealous colleagues judge him in absentia, trashing his writing, chiefly his novel, Sovrana Sostrata. Spite also motivates Snell's would-be murderer, literary theorist Frank Underwood, also known as Libricide. Snell, however, survives.