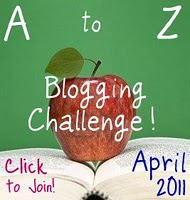 Now up to day 19 of the A-Z Blogging Challenge. Every day in April (except Sundays) I will be doing a post for each letter of the alphabet. It is my plan to make most of my posts reading &/or book-related. April 22nd is brought to you by the Letter S.

S is for Sherlock Holmes. I realize that there is very little that I can add to everything that has been said about Sherlock Holmes. There are societies in both England and America devoted to the Master and who debate every little detail of his life and adventures as written up by his good friend, Dr. John Watson. But I also realize that if I did not do homage to one of the greatest detectives in English fiction that I would be leaving a major hole in my development as a mystery-lover. 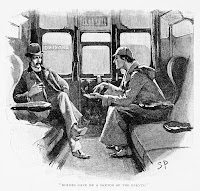 As one of my other posts indicated, I first fell in love with mysteries because of Nancy Drew. And while I read many of the other young adult mystery series (Hardy Boys, Trixie Belden, Encyclopedia Brown, The Three Investigators), my next real step into the world of detective fiction was with Sherlock Holmes. I distinctly remember spying the green, faux-leather volume sitting in a pride-of-place display in Walden Books in the Fort Wayne mall. Christmas of 1982. It was the only thing I really wanted for Christmas that year. At 799 pages, once I unwrapped it Christmas morning, it was the biggest book I had ever owned. And I loved it. I was well-acquainted with "The Red-Headed League" before 10th grade English ever thought to assign it as part of the curriculum. I already knew Holmes' methods and knew that he never once said, "Elementary, dear Watson." 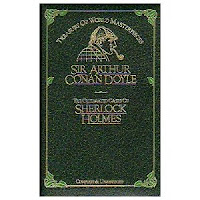 Sherlock Holmes may not have been the fair-play detective that I would learn to love in my Golden Age mysteries. He was constantly seeing and snatching up clues that he never produced for Watson or the reader until the very end, but I still enjoyed watching him work. Following him through his adventures from The Study in Scarlet all the way through to His Last Bow and The Casebook of Sherlock Holmes, I was thoroughly caught up in the Victiorian time period, the beginnings of the scientific approach to detection that Holmes put to use, and his constant chiding that Watson may see, but he did not observe. I also enjoyed his mastery of the art of disguise. And I know my love for mysteries would have been far different if I had never encountered London's brilliant "consulting detective."

I am another lover of Sherlock Holmes. I am really enjoying this Alphabet challenge. It's almost the first challenge I ever completed. I enjoy stopping by here.

Thanks for stopping by Tea! Glad you enjoy what you find!

My hubby loves Sherlock Holmes. Me, not so much.

Hi Bev!
I love Sherlock Homes. I just recently read The Hound of the Baskerville. And thoroughly enjoyed it. Hope your feeling better. Have a great day!

Well, Bev, you KNOW how much I adore Sherlock Holmes. This is a great choice for S, of course.
And I too, hope you're feeling better.