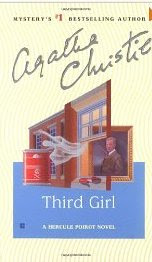 Chalk up another Birth Year Reading Challenge book. Today's read--Agatha Christie's Third Girl (1966). The third girl, Norma Restarick, drops in on Hercule Poirot one morning as he's finishing his breakfast chocolate. Like those of her generation, she's got a tousled, unkempt appearance, but added to that is a perplexed stare. She greets Poirot with the news that she thinks she may have committed a murder. But then, having giving his appearance due consideration, she decides that he is "too old" to help her and diesappears. Poirot's friend Mrs. Ariadne Oliver is able to help him track the girl down...but he finds it difficult to find a murder that she might have committed. Poirot then finds himself investigating the mysteries of the "third girl"--a girl taken on as a roommate to help meet the living experiences. What significance is there in Norma's being the third girl? He next finds himself meeting "The Peacock," Norma's undesirable boyfriend (from her father & stepmother's point of view), the wicked stepmother and the prodigal father. Norma keeps having delusions and dreams that she's committing murders and attempted murders? Is she guilty? Insane? Or the victim of some incredible plot? It is up to Poirot to find out.


This is one of Christie's last stories featuring Poirot (only three more published after this one) and, while still enjoyable, I did not find it as absorbing as her earlier work. There seems to be a decided effort to be "with it"--to show that she's up on the modish 60s with its drug scene and free love. Poirot still entertains, although it is a bit disconcerting to seem him doubting himself--actually contemplating that he might, indeed, be "too old." The twist at the end is interesting, but if one were paying proper attention one might see it coming (I wasn't and I didn't). I do wonder why Norma didn't...maybe it was the dream-state she was in. There are, as always, plenty of red herrings and clues strewn about. A nice decent little mystery rating three stars.

Thanks, Bev, your candle is burning. Sounds like you enjoyed this one!