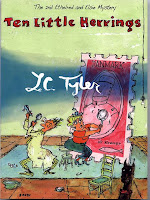 **Possible spoilers for those who have not read the first novel, The Herring-Seller's Apprentice

Ten Little Herrings by L. C. Tyler is the second book in a series starring Ethelred Tressider, a mediocre mystery-writer, and Elsie Thirkettle, his chocolate-loving agent. At the end of the last enstallment, Ethelred was flying off into the sunset, apparently giving up his career as a mystery-writer, and leaving his agent, Elsie, holding the bag. As Herrings opens, Elsie has tracked her MIA client to his hiding place, a run-down French hotel which has been hosting a stamp collector's conference. Her client refuses to elaborate on why he's hiding out in France...but then Elsie has a few secrets of her own. Elsie and Ethelred soon find themselve involved in murders, a hunt for missing stamps, a game of diamonds, diamonds, who's got the diamonds?, and a never-ending quest to keep Elsie stocked with chocolate. There are hotel guests who might be spies or diamond thieves or blackmailers or undercover detectives...or maybe all of the above.


As in Apprentice, the narration duties are divided between Elsie and Ethelred--with Elsie getting more of the spotlight this time. In the first half of the book, Elsie has more of the action and Ethelread gives us some very interesting insights into mystery-writing, murder and the art of poisoning--among other little snippets. As the mystery moves along, Ethelred gets more active, but his motives are still shrouded in mystery. I think perhaps Tyler gave more of the narration to Elsie just so we wouldn't know as much about what Ethelred was up to.

This book, like its predecessor, is an absolute hoot. Tyler is definitely paying homage to Agatha Christie (as the title suggest) and the book is a brilliant parody of classic British crime fiction. Elsie is a chocolate-crazed, inefficient send-up of what you'd get if you combined Miss Marple and Hercule Poirot at their nosiest and funniest. The twist on the classic wrap-up scene....you know, where the detective genius gathers all the suspects together and painstakingly goes through all the steps leading up to the solution to the crime...alone is worth the price of admission. I laughed out loud and shook my head over poor Elsie and her attempts at detection. If you're looking for a fun and funny book, this is the one for you. Four and a half stars.

Labels: 100 Plus, Outdo Yourself, Support Your Local Library

Didn't read the review, as I have these two on Kindle and haven't gotten to them yet. I just checked the last sentence to see what you thought. I've heard such good things about them that I'm going have to get to them soon.