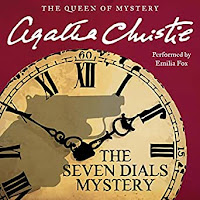 The Seven Dials Mystery (1929) by Agatha Christie
Sir Oswald and Lady Coote had rented Chimneys with the idea of enjoying country estate living. In their last days at the secluded country house, they did what all country house owners do--they hosted a country house party. It was all going so well--lively young people all over the place. But then the young people decide to play a great joke on Gerry Wade. Gerry had proven himself to be a champion sleeper--rising for "breakfast" in time for luncheon. So, his friends decide that it would be great fun to go out and buy an alarm clock each (and a few more for good measure) and line them all up under Gerry's bed after he'd gone to sleep. Eight alarm clocks, all set at incremental intervals are put in place and the group eagerly await the moment when Gerry will shoot out of his bed like a rocket after hearing the noise.
Only...he doesn't. Because during the night he had a lethal dose of chloral hydrate. The inquest brings in a verdict of "death by misadventure" but Gerry's sister doesn't really believe it. After all--she'd never known her "champion sleeper" of a brother to need a sleeping draught.
When Lady Eileen Brent, "Bundle" to her friends, and her father come home to Chimneys after a trip to the Continent, she finds an unfinished letter from Gerry Wade to his sister in her desk drawer. She's heard all about the unfortunate death and believes that it just might need a bit of looking into. As she's rushing into town to consult a friend, she (as she thinks) runs over a man and kills him. But when the doctor examines the body he finds that the car didn't touch him and the man was actually shot. The man's dying words had been "Seven Dials...tell....Tell...Jimmy Thesinger." Now Bundle is sure something must be done. She teams up with Jimmy Thesinger (friend of Gerry Wade and the dead man, Ronny Devereaux) and Gerry's sister Loraine and the three set out to find the Seven Dials and get to the bottom the mystery.
Bundle also consults Superintendent Battle, whom she met previously in the incidents related in The Secret of Chimneys. After due consideration of the letter written by Wade, she is convinced that he (as a member of the Foreign Office) had run across a secret society and was killed for his pains. She wants the superintendent to give her the names of all the secret societies in the Seven Dials. He complies, but tries (unsuccessfully) to warn her off. The secret society is found, some secret plans are nearly stolen, and much mayhem ensues before the secret of the Seven Dials is finally revealed.

This semi-sequel to The Secret of Chimneys is a bit of a toss-up for me. On the one hand, I thoroughly enjoyed the light-hearted, near-Wodehousian atmosphere of the country house party and their build-up to the alarm clock hi-jinks. The characters are quite good fun. And if I had kept that tone in mind throughout the book, I might not have a rating dilemma on my hands. But Bundle gets downright serious about her search for the secret society and when she found it, I was all for getting down to mystery business and capturing the evil mastermind behind it all. Except...that's not what we've got. The secret society is really on the side of the angels and the culprit is....someone I didn't expect.
I suppose I should hand it to Dame Agatha for pulling the wool over my eyes on this reading, especially since I read this once back in the mists of time. I believe I enjoyed twisty ending much more that first time round. After a bit of thought: ★★★ for this reading. Good solid fun and high-spirited adventure.
************
Deaths =  (one poisoned; one shot)
Posted by Bev Hankins at 9:55 PM

This is one of the first books I read by Christie back in my teen days. I remember really enjoying it, moreso than murder on the Orient Express which was the first Christie I ever read. I don't recall much of ...Seven Dials... even after reading your review. I wonder if I ought to give it a re-read. In 2009 I did a Christie re-read in the spring and had so much fun. I re-read Mrs. McGinty's Dead, Poirot Loses a Client and Halloween Party and one other...Appointment with Death, maybe?

John: Orient Express was also my first Christie. I adored it. I don't remember precisely when I read Dials...sometime during my run through all the mysteries on the shelves of our public library.

I'm currently trying to read Christie in order (more or less--I have a few on CD and have jumped ahead with them whenever I have a road trip to take). I've never read them that way before--my first time through I just read them as I found them.

I do love the scene of everyone sitting around with the clock face masks on. Do you suppose they were COVID-19 compliant masks? :-)

LOL. I'd say so--since they only had eye slits.

Once again, it was the BBC movie that made me want to read this book around 1983. I was a little disappointed with the end (the television version was a lot more dramatic), but still, I loved this book. Bundle Brent (Lady Eileen) seems so feisty! I think the secret society that isn't evil was such a twist!