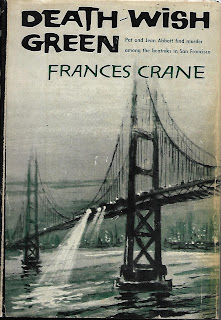 Death-Wish Green (1960) by Frances Crane
Cozy mystery series with a hook in the title--whether it be a pun on cooking (Wonton Terror by Vivien Chien in the Noodle Shop Mysteries) or book-related (Bookmarked for Murder by V. M. Burns in the Mystery Bookshop series) or plays on gardening or scrapbooking or knitting or sundry other hobbies--have been the rage for quite some time. Periodically there are series with colors in the title. The Travis McGee series begun in 1964 by John D. MacDonald is a well-known series in this vein. Betsy Allen wrote a girls' mystery series (with the first book published in 1948) starring Connie Blair using this hook. Frances Crane beat them both--publishing her first book, The Turquoise Shop, in 1941. It was set in New Mexico and starred Jean Holly and her eventual husband Pat Abbott. I'm not sure if Crane's series is the first to feature a rainbow of titles, but it is the earliest I have read.
Death-Wish Green takes place nearly 20 years after that first book and is set in San Francisco amongst the beatnik-wannabes. Bored sons and daughters of the city's elite dress up in black and mix in with the artsy, grittier crowds at North Beach. Mostly it's just fun and meant to spice up the lives of kid with too much money and too much time on their hands...occasionally it leads experimentation with marijuana and other drugs. But it's never been dangerous for Katie Spinner's crowd...until her white Model A topless Ford is found abandoned in the middle of Golden Gate Bridge. The police take the view that Katie got really bored with life and decided to jump. But those who know Katie, including Jean Abbott, all say she would never do such a thing. Jean becomes convinced it's murder--or at the least kidnapping and soon the Abbotts' sleuthing will discover both crimes are involved. But was Katie killed or kidnapped? Or both?  You'll have to read to find out. Oh..and what does death-wish green have to do with it all? Well, it's the color Katie's friend Celeste is wearing when something unpleasant happens to her as well.
This book has a more serious feel to it. The Abbotts have never been the wise-cracking, humorous pair found in the Thin Man movies or even the slightly wacky pairing of Pam and Jerry North, but there has been humor and a light touch. Here we have a grittier setting. There's a more deliberate cruelty behind the murderer's motives and the drugs give another edge to the drama. The plot is still enjoyable and I did like how Crane kept us guessing on whether Katie was murdered or kidnapped--both or neither. She also provides a nice peek at San Francisco at the beginning of the Sixties.  ★★★
**************
Deaths = 2 (one fell from height; one shot)
Posted by Bev Hankins at 10:54 PM