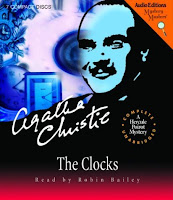 Sheila Webb, a typist for the Cavendish Secretarial and Typewriting Bureau, is sent on assignment to the home of Miss Millicent Pebmarsh in Wilbraham Crescent. A phone call requesting a typist particularly asked for Sheila Webb and gave instructions that if Miss Pebmarsh were not yet home that Sheila enter the house and wait in the sitting room. Sheila arrives early and does as instructed. At first she's simply intrigued by the fact that Miss Pebmarsh keeps six clocks in the same room and four of them register 4:13--nearly an hour later than the actual time. But then she's horrified to realize that there's a dead man behind the sofa. Miss Pebmarsh, who Shelia immediately realizes is blind, nearly steps on the body when she comes home and the horror of the situation sends Shelia screaming out of the house....

...Straight into the arms of Colin Lamb--who is not nearly as innocent as his name would suggest. Colin, who works for Special Branch, is scanning the addresses in the crescent in search of Number 61 (which just possibly may be of interest to those who are hunting communist sympathizers). He immediately becomes interested in the murder once he realizes that Miss Pebmarsh's house is situated so its back garden connects with the house he's looking for. Is it too much to hope that the mysterious dead man may have something to do with his own business?

Inspector Hardcastle takes up the case and every clue (what few there are) seems to lead to a dead end. Colin finally takes the problem to his friend Hercule Poirot who has often boasted that one need not run and to and fro gathering clues or examining with a magnifying glass. One can just be given all the facts, sit back and let the little grey cells do their thing, and, voila, the solution becomes apparent. That almost works--Poirot doesn't run to and fro, but he does have Colin to do that (and to relay any tidbits that Hardcastle discovers since Colin and the Inspector are old friends). It is interesting that Poirot does not actually interview anybody in the case and successfully identifies the culprit.

I picked out this audio version of Christie's mystery to take along with me for my trip back home last week. I don't do a lot of audio novels--because I like to review my books here on the blog and it's more difficult for me to get details when I listen rather than read. So, generally when I do listen to audio novels I try to choose stories that I'm already familiar with. It had been quite some time since I read The Clocks, so while Christie's writing was familiar I was still able to enjoy the mystery. I immediately fastened onto the correct culprit, though I didn't get the motive right.

In my defense, Christie has a lot going on in this one. We've got the central murder of the unknown man and the mystery of who he is, why he was found in Miss Pebmarsh's house, and why Sheila Webb was deliberately brought there to discover him. But we've also got the side-story with Colin Lamb and his hunt for a communist spy headquarters. It's no wonder I was a bit confused about who might be responsible for what. It's an interesting little mystery, but I do think there were a few too many coincidences for this to be one of Christie's best work.

Robin Bailey does an excellent job with the reading. He manages to juggle voices for a dozen or so different characters--giving them all different intonations and enabling the listener to keep them all straight. My one slight quibble with his performance comes with his rendition of Poirot. Perhaps it is because I tend to have David Suchet's voice in my head--but it seems to me that Bailey's Poirot is too deep and brusque. But that is minor. Overall, the reading is highly entertaining and kept me in thrall the entire time I was in the car. ★★★ for the story itself. ★★★★  for the audio performance.
*************
Deaths = Three (two stabbed; one strangled)