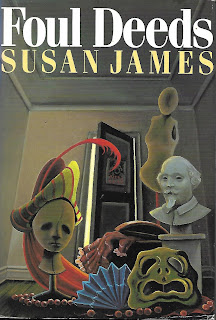 Charles College, a small posh liberal arts college, is beset by a series of murders that are based on deaths in Shakespeare. The first to die is a beautiful young English major who was playing the part of Cordelia in King Lear. She is found hanging in the theater's costume storage room. Next on the list was the department's Shakepeare expert--killed with a rapier in the fashion of Polonius in Hamlet. Victims forced into the roles of Othello and Desdemona soon follow and the killer has plans for more Shakespearean carnage.

State Police Lieutenant Polly Winslade is assigned to the case and she and her sergeant Michael Camarata must try to establish if they have a nut with Shakespeare fixation, someone with a grudge against the English Department, or someone with a motive they can't yet see. The clues are few and far between and the information they pick up about the infightings and dalliances within the academic world seem to have little to do with the murders. Or if they do, there doesn't seem to be any proof. Winslade is going to need her well-established luck if she's going to solve this one....

Okay. That's my final analysis--this book is okay. Certainly not spectacular and definitely not going down on record as one of my all-time favorite academic mysteries. Publishers Weekly seemed to think this was pretty spiffy--saying "James neatly skewers the tight world of academia, particularly the foibles of administrators, and sharply limns the infighting of young scholars desperate for promotion and tenure." Well, I work in academia and I have a soft spot for academic mysteries and the representations here are pretty run-of-the-mill.

The murder methods (and motive, quite frankly) are lifted wholesale from a 1973 Vincent Price film Theater of Blood. Credit is duly given when the villain of the piece admits as much in the final scenes. I recognized the connection early on, but didn't spot the criminal. Not because I didn't recognize clues when they came along (if they did), but because I really wasn't looking for them. I was too busy trying to find the thread of the mystery to be bothered with clues. You see, the plot idea was fine--I can go along with the whole let's take revenge on people and murder them in the style of Shakepeare deaths because reasons thing. But the book was littered and overflowing with affairs. Pretty much everybody was either having an affair with somebody else (and that includes Sergeant Carmarata) OR they were lusting after somebody else. It was difficult to keep up with the players--with or without a scorecard. I'm not sure if the James team thought dumping adultery in there left and right was the best way to provide red herrings or what, but they don't seem to have realized that there is such a thing as too much of a good thing. Less adultery and few other red herring motives would have been more effective.

The best part of the book was the characters of Lt. Winslade and Professor Tom Hammock, who was a mentor to first victim and who really is never a suspect. He helps Winslade with the ins and outs of the department and plays a semi-Watson part. And her interest in him helps her to eventually track down the culprit. The biggest disappointment was that their mutual attraction was obviously going to go nowhere. Amidst all those passions running amok, the two most sympathetic characters are left out in the cold.

I realize that this is a pretty lukewarm review. I didn't really plan it that way. I thought I was more enthusiastic about the book when I first started. But--no, actually, if you're looking for an engaging academic mystery, then this probably isn't it. ★★ and a half.

*Pseudonym for an academic husband/wife writing team. I wasn't able to find much more than that on the internet.