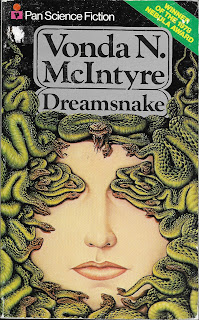 Snake went back to bed, musing about Center, which gave chains to slavers but refused to talk to healers. (p. 127)
Dreamsnake (1978) by Vonda N. McIntyre

In a post-apocalyptic world, healers have evolved techniques using a combination of nature and the little bit of off-world technology to treat and cure the people left outside the sealed City. Snake is a young healer who has been honored with a special name--her family believes she will make a strong healer and the name Snake has only been given three times before. She has begun her probationary year as a fully equipped healer and makes a trip into the desert with her three medicinal snakes. Two offer ways through their medically changed venom to treat cancers and other diseases. The third, a dreamsnake named Grass, has the ability to give soothing dreams and ease a dying patient's last moments.

A misunderstanding among the desert people results in the death of Grass and leaves Snake crippled in her abilities to fully function as a healer. She dreads returning to the Center and telling her people that she has allowed one of the precious dreamsnakes to be killed. For dreamsnakes are rare and it is difficult to get them to reproduce. She doesn't fear punishment, but she knows that there won't be a replacement for Grass and that she may have to give up her profession. And that would be punishment enough.

But then a chance comes to travel to the City where she might find a replacement. The journey will be hard and there are dangers she can't imagine--from the crazies (half-mad from the effects of radiation) to thieves and the storm season is coming bring dangers of its own. Its a risky quest, but one that Snake knows she must take up. She makes friends along the way--helping a mayor's son named Gabriel to start his own journey to find his own path and rescuing a young girl named Melissa from an abusive guardian. If she's successful, she will have proved herself worth of her name.

Dreamsnake was one of the first science fiction novels I read that was written by a woman and which had a strong female protagonist. Snake is a strong, well-rounded character. She is grounded morally and is at her best when relating to others--whether during healing sessions or through other means. Her care and concern for the others she encounters from Arevin and the desert people to Gabriel and Melissa are her strongest characteristics. She is a healer--not just by profession, but in her very nature. And seeing a woman on a quest was a great thing as well. So many quest stories are about men and boys. It was empowering for this preteen to read such a story about such a forceful personality.

I knew this book had made a strong impression on me when I first read it over 30 years ago. When I sat down read it again, it was like I had never left it. I knew what was going to happen next because it came back so clearly. But that didn't spoil this reading at all. It was more like it amplified it. It will sound very mystical (kind of like the "magic" medicinal changing of venom to cures), but it seemed as though I was both reading it as I had before as well as reading it now. I remembered the excitement of discovering a strong female character--strong and yet with flaws; strong enough to learn from her mistakes; strong enough to take responsibility for those mistakes and find a way to make things right. But I also read it with a sense of nostalgia, knowing that I had already read it and felt that way. It was an extraordinary reading experience. ★★★★★