The Gimmel Flask (1977) by Douglas Clark 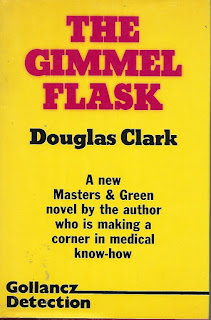 When the senior partner of Hardy, Williams and Lamont--auctioneers and estate agents in a small Anglian town, is poisoned with a rare, virtually unobtainable poison that goes by the name of croton oil, the local police have quite a mystery on their hands. Somebody who knew Fred Hardy's habit of mixing his own oil and vinegar salad dressing at table substituted the oily poison for harmless kitchen oil. And then made a second trip to his house to retrieve the suspect container...and old-fashioned, two-necked bottle called a gimmel flask.
Superintendent Masters and Inspector Green are sent by the Yard to help out the local police force who have hunted high and low, but found no source for the poison and have about the same success coming up with motives for the auctioneer's murder. At one time in the 19th Century, the oil was used in diluted form as a purge for humans and animals, but it has long since been removed from pharmacies as too dangerous even when diluted. It's up to the team from the Yard to not only discover who wanted Hardy dead, but also the source of such a hard-to-get means of dispatch.
This is the ninth entry in the Masters and Green series and it is, I believe, the very first one I ever read (long before blogging). The men have finally reached the point where they can work together without getting on one another's nerves (well...mostly). They've begun to realize that their differences are part of what makes their team so successful. It also seems that their initial antagonism served to spur each of them to try and outdo the other--in a way that was productive for the team's detective work. Masters has even deliberately requested Green stay on and recommended him for an upgrade in rank. 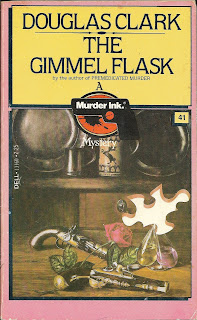 The interesting murder method and the way the team works together is what hooked me on this series initially and I find myself enjoying it even more in this reread--especially after seeing the incredible antagonism between Masters and Green in the early installments. We learn quite a bit about the ins and outs of the auction room and how regular bidders operate. There is an added complication of an auction "ring"--a group of professionals (antique dealers and the like) who manage a system that allows them to buy cheap and edge out competition, The team from the Yard must determine whether the sharp dealings of the ring had anything to do with Hardy's murder. It all makes for an intricate investigation and, of course, Masters and company navigate the complexities to arrive at the solution in record time. ★★★★ and 1/2.
****************
Deaths = one poisoned
Posted by Bev Hankins at 7:45 PM