Noah over at Noah's Archives is hosting the latest round of The Tuesday Night Bloggers, the brain-child of Curtis at The Passing Tramp. It's a weekly gathering of like-minded folk to discuss a mystery author from the Golden Age of Detection. We began our meetings with the Queen of Crime, Agatha Christie, and the month of November has been devoted to Ellery Queen. I missed participating last week and wasn't sure if I'd have anything ready for the final Queen posting. But here's a short look at Queenly Collections.

Not only did Queen produce a substantial body of work of their own, but the Queen name has provided mystery readers with collections of high-quality short stories under the Master of Mysteries Series, the Queen's Awards Annuals, and various collections of top-flight stories from the Ellery Queen Mystery Magazine. EQMM has always had high editorial standards and as a result is one of the few fiction magazines to survive the decline of such publications. It was first launched in 1941 and currently holds distinction as the longest-running mystery magazine. It has always encouraged new writers and still accepts unsolicited submission both by mail and the online submission manager. The feature "Department of First Stories" has introduced readers to hundreds of new writers who have gone on to delight mystery fans for years. 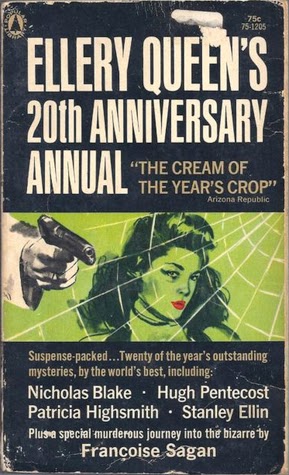 I read a lot of collections under the Queen name during elementary and junior high--nearly as many as the Hitchcock books (I was blessed with well-stocked libraries growing up). My most recent Queen collection read was Ellery Queen's 20th Anniversary Annual. It is a collection of short stories that contains an example of nearly every mystery form in the genre--from pure puzzles to spy thrillers; from whodunnits to howdunnits to whydunnits. There are professional detectives and amateurs investigating crimes that cover the gamut from blackmail, theft, frame-up, and sabotage to the ultimate crime...murder. And our authors include well-known names such as Nicholas Blake, Paticia Highsmith and Helen McCloy as well as those unfamiliar to me like A. H. Z. Carr, Holly Roth, and J. F. Pierce. There are serious crime fiction pieces and even a send up of Ellery Queen himself in a lovely little story starring Celery Green.

Every story is a winner on one level or another and several are just flat-out amazing. My favorites are "The Purple Is Everything" by Dorothy Salisbury Davis (when a theft really isn't a theft), "The Washington Party Murder" by A. H. Z. Carr (where Sarah Burton, famous foreign correspondent, returns to Washington DC to discover what really happened the night her husband died), "The Cobblestones of Saratoga Street" (in which we learn the real reason Miss Augusta & Miss Louisa don't want the cobblestones removed), and "Murder Ad Lib" by Helen McCloy (in which Dr. Basil Willing picks up on a clever clue on a "dark and stormy night).

For those who like their murders in small doses, a collection published under the Queen name is sure to please--whether you pick up an issue of EQMM or dip into the hard-bound anthologies.

************
Next week at the Tuesday Night Bloggers, we'll be meeting up at Moira's place (Clothes in Books) to investigate the works of Ngaio Marsh.
Posted by Bev Hankins at 10:23 AM

I cannot for the life of me figure out why two paragraphs appear larger than the others. I've attempted to fix it...but it refuses to be fixed.

Nice look at the collections Bev, an area I know little about. What a lot EQ contributed to the crime fiction world...
I lose patience with Blogger, I often cannot sort out the appearance of my blog. I suppose we get what we pay for....