The Tuesday Night Bloggers: My Introduction to Ellery Queen

Noah over at Noah's Archives is hosting the latest round of The Tuesday Night Bloggers, the brain-child of Curtis at The Passing Tramp. It's a weekly gathering of like-minded folk to discuss a mystery author from the Golden Age of Detection. We began our meetings with the Queen of Crime, Agatha Christie, and for the next three weeks we will be taking a look at Ellery Queen.

Ellery Queen is both the named author of the series of mysteries which began with The Roman Hat Mystery in 1929 as well as the name of the primary detective in the series. The author is actually a writing team--Frederic Dannay and Manfred Lee, two cousins who launched the Queen career with a writing contest for McClure Magazine. Ellery Queen, the amateur detective, is also a mystery writer who gets most of his writing ideas from helping his father Inspector Richard Queen solve crimes. 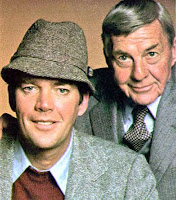 I am not as widely read in Queen as I am in Christie. So I thought I would begin my set of posts with a look at my two-fold introduction to Ellery Queen. I first met Ellery Queen in the 1970s through the television show starring Jim Hutton as Ellery. It seems quite astounding to me now to realize that the show lasted only one season--running from September 1975 through April 1976. I have such fond memories of Ellery turning to the camera right before the last commercial break to ask us: "Okay, you've got all the clues. Do you know who did it? I think I do. Can you guess?" My dad and I would always try to outdo each other in the amateur detective department. We're competitive that way.

Hutton's performance as the absent-minded, but incredibly perceptive Ellery was absolutely central to my enjoyment of the show. And his relationship with his father, played by David Wayne, made the character perfect for the series as it was written for television. It's a shame that it didn't quite make the cut for a longer run. I also enjoyed the feeling that I was right there solving the case alongside Ellery--made all the more real by him breaking the fourth wall and addressing the audience.


When I met her in junior high school, I was delighted to discover that a friend of mine loved that show as well and before it became available on DVD we would lament the fact that we might never see it again. [Fun fact: my husband--before I met him--had a Beta VCR and had recorded exactly ONE episode, from TV-land or some such thing. It was "The Adventure of the Mad Tea Party" and I watched it periodically until the Beta machine died.] My husband has since seen to it that I own the complete series and I, in turn, have gifted a set to that friend.

The second part of my introduction to the Ellery Queen name was through a juvenile mystery written by "Ellery Queen, Jr." I'm quite sure that I was attracted to the book sitting on the shelf at the local used book store because I had watched the Ellery Queen mysteries on television. I don't actually remember a great deal about the book which Goodreads tells me is an "eerie mystery thriller [which] features a vanishing girl, a Spanish speaking parrot, and a time-telling turtle- in a case that baffles even the Secret Service." I do know that the combination of the TV series and this book made me eager to try out the Ellery Queen series once I returned to more serious mystery reading in the early 1990s.

The TV series reached the UK, and I remember enjoying its very distinctive look, as well as the mysteries. And, as you say, the father/son relationship. Love your Tuesday Night Logo - is it for sharing? I'd love to add it to my pieces if you don't mind.

Great post, I never realised there was a TV series for Ellery Queen.

Kate, it was such a good show.

I'm stunned to find out that that show ran for only one season - I remember it so well. My dad must have watched lots of reruns ;-)

And - I never thought to look for it on DVD until now - thank you very much for that suggestion!

Moira, I think Noah put that "cover" together! I'm starting to think I look like one of those guys!!!

Bev, I was so excited when the DVD finally came out because, until then, all I had were my memories. There have never been enough "pure whodunnit" TV series, and this one invited us to play along! Such a fun show, and I can understand why Moira would like it's "distinctive look!" I wish there had been less of Simon Hillerman as the annoying "rival" to Ellery. I wish that, like the Rex Stout series, some of Ellery's actual written cases had been adapted. (The international mysteries would have made great two or three parters!) But I'll take what I can get! Thanks for the memories!

I also became a fan through the TV show and some of there short stories and then fell in love with the novels, especially those from the 30s and 40s though I like some of the later experiments too - great post Bev.