Noah over at Noah's Archives is hosting the latest round of The Tuesday Night Bloggers, the brain-child of Curtis at The Passing Tramp. It's a weekly gathering of like-minded folk to discuss a mystery author from the Golden Age of Detection. We began our meetings with the Queen of Crime, Agatha Christie, and for the next few weeks we will be taking a look at Ellery Queen.

As I mentioned in last week's post, I haven't read many of the Queen novels. I grew up with the televised version of Ellery Queen and loved those. On TV Ellery, Inspector Queen, and the policemen at the Inspector's beck and call weren't quite as hard-boiled as they seem to be in the novels I first sampled. Not that we're talking Raymond Chandler or Dashiell Hammett here--certainly not. Just a bit harder around the edges. And I had to be in the right mood for it. Apparently my mood was just right when I read The Chinese Orange Mystery in 2011.


Up till then, The Roman Hat Mystery, the first of the Ellery Queen novels, had held pride of place. But this little gem which combines a semi-locked room, a murder of a total unknown, beautiful jewels, rare stamps, and a lunatic old scholar has shoved the Hat firmly aside. Titled The Chinese Orange Mystery, it so easily, as the foreword points out, could have been named The Crime That Was Backwards. From the back of the book: "Turnabout is foul play. There were many odd things about the fat man. No one had seen him enter the luxurious suite and no one knew his name. Somehow all his clothes had been put on him backward, and all the furniture around him reversed. The room in which he was found was locked from the inside, and aside from him, was empty. It was unlike any case Ellery Queen had ever seen--except for two hard facts. The man was dead. And it was Queen's baffling job to find the murderer."

There seem to be absolutely no clues available, only confusion. The man came to visit Donald Kirk--publisher and collector of rare gems and even rarer stamps--but refused to state either his name or his business to Kirk's assistant James Osborne. Put in an anteroom to wait for Kirk's arrival, the man is later discovered dead, clothes on backwards and every item in the room reversed--rug upside down, pictures turned to the wall, and even a fruit bowl dumped and the bowl placed over the fruit. No one in the Kirk household or among his friends claim to have seen the man before and there is nothing on the body to identify him. What did he want? Was he a hopeful author? Did he have a gem or a rare stamp for sale? And why did the murderer take the time for reversal? Answer these questions and you just might beat Ellery to the solution.


I humbly admit that I did not. Not even close. But that didn't bother me, I rarely figure out the Ellery Queen mysteries. They are such well-constructed puzzles that I just don't get them. All the clues are there--just as Ellery states in the challenge to the reader. It's never a case where the reader can cry "Unfair!" Every bit of evidence is dangled under your unsuspecting nose and all you have to do is recognize it for what it is and you'd be home and dry. 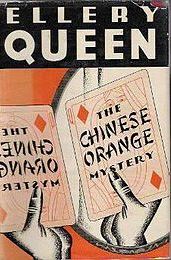 Wonderful period mystery. Lively characters--all well-drawn and with enough secrets and hidden quirks to keep you guessing while you try to puzzle your way to the solution. The motive for the murder wasn't quite as strong as I'd like, although I can see the pyschology behind it. That small quibble gives the book four 1/2 stars out of five, rather than the full five-star rating. I highly recommend this one!

*Incidentally, the cover I used to fashion the TNB logo for the Queen edition of the club is an edition of The Chinese Orange Mystery.
Posted by Bev Hankins at 12:30 AM

I'm afraid that, after the joys of Greek Coffin and Siamese Twin, this one felt like a lesser effort to me. That makes me sound spoiled rotten because it IS clever. I like the reason for the backwards bit, but the murderer here was a disappointment to me.

definitely adding this one to the list - someone else recommended it too. I like ingenious mysteries and explanations.

The only mystery by Ellery Queen that I ever solved was Halfway House and I didn't even get started on the solution in The Chinese Orange. It just seemed locked up so tight - and it was very clever.

I do so enjoy Ellery Queen :-)