The hubby wanted to take a trip to Route 66 in "his" 1966 Corvair. I was agreeable--especially when I found out that my reward for being an agreeable wife was a trip to one of my favorite used bookstores: Books on the Square in Virden, IL. We took a long weekend for a lovely fall drive (about 500 miles round-trip) and Bev came back a very happy girl. I tend to have great success finding my beloved pocket-size editions in Virden and this trip was no different. I am now 39 books richer.... 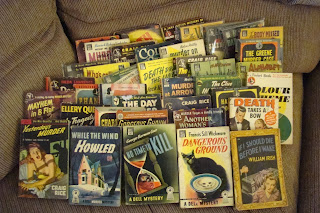 Here's the run-down of the haul:

What a great week next!

Treasure hunting for books is the best fun ever! Congratulations on your latest haul. I am curious though if you buy these as collector copies or as reading copies. I have some very old ones, but the paper is beginning to crack and I'm afraid they're reaching a point of not being readable.

What a great haul...I didn't know you could find George Harmon Coxe anymore...and Helen McCloy and Helen Reilly and the lockridges...I'm drooling :-)

Once again I am very envious. I never find any bookstores or book sales with the old vintage paperbacks you find. Some wonderful books there.

Yikes! What a fabulous haul! Enjoy!

I"m sorry to make you all drool and envious...but when I find so many good ones I just have to tell everybody!

John, the owner of the shop, told me that he had just picked up a "trunk load" of these pocket-size editions at an estate sale in a nearby town and that he had thought of me when he brought them to the shop. Very fortunate timing for me.