This is my second installment for Curtis's brain-child The Tuesday Night Bloggers--an endeavor in which several bloggers associated with the Golden Age Detection group on Facebook come together each week to discuss all manner of things associated with the Queen of Crime, Agatha Christie. Curt gathers up our various musings and links them over at his delightful blog The Passing Tramp. It is possible that we will continue our meetings to cover other Golden Age practitioners of the art of murder, but for now we will present various posts honoring Dame Agatha.

Last week I briefly mentioned At Bertram's Hotel in conjunction with my featured Christie novel, Murder on the Orient Express. I picked those two up at an elementary school book fair and launched myself into a more grown-up world of mysteries that took me steadily away from Nancy Drew. Bertram's didn't make a favorable impression on my younger self and I noted that it was one of the few (and on second thought perhaps the only) Christie novels that I have never reread. I've since seen each of the dramatizations starring Joan Hickson and Geraldine McEwan as Miss Jane Marple, but never felt the desire to revisit the novel. I decided to use the Tuesday Night Bloggers forum as reason to do so now. So--what are my thoughts after nearly 40 years?

"So, there was something wrong with this place?"
"There was and is everything wrong with it."
Miss Marple sighed, "It seemed wonderful at first--unchanged you know--like stepping back into the past--to the part of the past that one had loved and enjoyed."

On the surface Bertram's Hotel represents an Edwardian past that many Londoner hated to see go. Here, elderly ladies like Miss Jane Marple can come and be pampered with real buttered muffins and chambermaids and rooms with all the comforts they remember from their visits as much younger people. Here, Lady Selina Hazy and other members of the fading aristocracy can come still to see and be seen and to recognize dear old friends from the past. Here, absent-minded clergymen like the Canon Pennyfeather can be shepherded gently to appointments they might otherwise miss and reminded of why they came to Bertram's in the first place. Old world splendor and service are to be had at a premium.

I learned (what I suppose I really knew already) that one can never go back, that one should not ever try to go back—that the essence of life is going forward. Life is really a One Way Street, isn’t it? (p. 194)

Still, Miss Marple senses that despite appearances Bertram's isn't really the same. And Chief Inspector Davy is quite sure that there is more to Bertram's than meets the eye. One wonders how--even at premium prices--Bertram's can possible turn a profit operating in the modern world under Edwardian precepts and in Edwardian style. And the combined observations of Miss Marple and Inspector Davy, along with standard police investigations soon lead Davy to the discovery of just what Bertram's is all about.

Meanwhile, there is another mystery surrounding the adventuress Lady Bess Sedgewick and her estranged daughter, Elvira Blake. Racing driver Ladislaus Malinowski has been hanging about the hotel, but is he there to see Bess or Elvira? Or both? It's even possible that he is somehow involved in the mysterious goings-on behind Bertram's placid facade. And then there's the doorman Micky Gorman. He, too, has connections with Bess and Elvira and Inspector Davy becomes very interested indeed when Gorman is shot and killed one foggy night--apparently protecting Elvira from a gunman. Was Elvira the intended target? Or does it matter that she has already been mistaken twice for her mother? These, too, are questions that Miss Marple and Inspector Davy will have to resolve.

Such a thing has never happened at Bertram's. I mean, we're not the sort of hotel where murders happen. (p. 240)

This time around I found myself liking the story itself much more than I did when I first discovered Agatha Christie. It is very intriguing to investigate the differences between appearances and reality. The slower pace of the novel didn't disconcert me nearly as much even though the murder doesn't come along until more than two-thirds of the way into the novel. Having already read Christie's novels once through, I better appreciate Miss Marple's subtle observations and references. And I also enjoy Inspector Davy's approach to detection which involves a "hunch" or two that will fortunatey pan out. It is a shame most of the actual detective work (tracking down the money from the train robbery, for instance) takes place off-stage.

What is also bit difficult to ignore as a more experienced reader is that Bertram's isn't the only place where the past seems to intrude on the present--in this case the early sixties where those "long-haired Beatles or whatever you call them" rule as Colonel Luscombe says. Despite the world in general being more modern, young women like Elvira Blake (who is nearly twenty, by the way) mustn't go out and about without chaperons and are sent to finishing schools and if they have lovers they may be viewed as nymphomaniacs. The Edwardian (and possibly pre-Edwardian) world still seems to hold sway over the modern sensibilities of the swinging sixties. Is this deliberate on Christie's part--to further emphasize how things are a bit "off" in the story. Or are Christie's Golden roots showing? 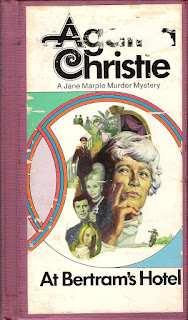 Overall, a much more enjoyable experience on a second reading. A solid story from Christie's later period and an interesting look at the changing world. Still not one that will top my list for rereads, however. ★★★

************
As I mention above, I first got this book through an elementary school book fair, but that copy (pictured, left) was long ago given up. I bought another copy in the 1990s with the thought that I would give it another try, but that didn't happen. Until now. And that's how it comes to count for my Mount TBR Challenge tally.
Posted by Bev Hankins at 12:30 AM

Labels: 100 Plus, 52 Books in 52 Weeks, How Many Books, Mount TBR, My Kind of Mystery, R.I.P. Challenge, Tuesday Night Bloggers

Great review Bev. I always liked the way that nostalgia is presented as part of a criminal conspiracy as it is also an understandable part fo the appeal of the book now - one of the later Marple books that I remember bext actually.

I agree that the criminals' use of nostalgia to mask illegal activity is interesting - and I do like Bertram's itself, so I'm probably falling prey to that same desire for the old-fashioned graces (and the scones!). Ultimately, though, the scheme that is being masked seems silly to me, and the connection with the murders is too vague to be satisfying. In this case, it feels like the parts of this novel are much better than the whole.

Wonderful review, Bev. I too enjoyed AT BERTRAM'S HOTEL much more when I reread it as an oldie. (I mean when I was an 'oldie') Actually, I wish there were a hotel like this still in existence in London. (And I wish I had the dough to go visit.)
Wasn't Bertram's based on Brown's - a real hotel? And one at which Christie actually stayed? But I'm sure that it has changed a great deal since then.

Judging what the present day is like, I very foolishly hanker for the past.

Really enjoyed your review Bev. I find Bertram's Hotel discomfiting - I think I always felt it was a bit of a cheat. At the end of it she says to the reader in effect 'you're a fool if you think it wasn't too good to be true' - but that doesn't seem quite fair, and there are other cases where 'too good to be true' is allowed. Is Lucy Eylesbarrow going to turn out to be a serial killer because her fairy godmother appearance in people's lives is completely unconvincing?
Anyway, it was fun to read about it again, and perhaps I will pick it up and, like you, find it more enjoyable.

Apparently London's "Bertrams" with their faded grandeur and terrible food were quietly going bust - but have now become over-the-top luxurious (and way beyond most Londoners' means). They are venues for "international financiers" to entertain clients and hold meetings in privacy. Christie would have loved that. Is the Edwardian Era back after all?

I liked this one too so much better on rereading. I agree with Brad, the one criminal scheme is a bit dodgy, but there's still so much like to like in the social detail and some of main characters are quite interesting.