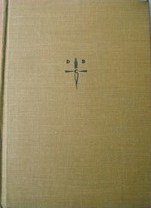 Veiled Murder by Alice Campbell: Andrea Wraybourne's husband is supposed to be Britain's finest--from an old titled family and an up-and-coming war hero.  Nobody tells Andy that he's also mean, nasty, and out to make her life miserable once they're married.  Rex Wraybourne manages to kill one of Andy's childhood friends (one of two brothers that she's always considered her brothers--though not related) and then convinces her that in the interest of the inlaws she's come to know and, well not love, but pity--and for whom she wants to provide out of an inheritance that she's got coming her way--that she should help him cover it up as an accident, a shooting of a man he mistook for a German spy.

She's then taken and buried (not literally) in rural England in a household full of eerie atmosphere and the lovely family and hangers-on (one drug addict, one kind of crazy cousin, and a spinster who's devoted to the family). Two more murders occur--one the sadist husband (hurrah!) but Andy is attacked and threatened and there is even an attempt to frame her for murder.  Fortunately, the family lawyer appears to be on her side and helps her to get to the bottom of the whole ghastly mess.

And a ghastly mess it is, too.  Not the best written vintage mystery I've come across.  Lots of atmosphere, but very little in the riveting details and interesting mystery department.  Lots of overwraught dramatics on the part of various females, but very little golden age detecting going on.  It starts out promising enough with a very nice opening scene in London, but as the pages turn it loses momentum.  And there are a couple of purple prose final paragraphs to round everything up:

She was crying, despicably, on a chest that provided a buttress, no more. Her counsel was giving her no aid. She felt the bleakness of the eyes far above her. The arms that might have gone around her hung down at his sides--hewn stone. She groped upward, drew down the mistrustful head. The lips her own timorous pair touched were suspicious, cold.

Cold? The fire that leaped from [name withheld--I'd hate to spoil the ending]'s mouth was fiercely frightening. So was the sudden bruising pressure of his revitalized arms Foundations rocked, thought was suspended. Was this all she had wanted? flashed on her mazed vision. So simple...

The tumult was her heart.

Seriously? Vintage mystery or raging romance novel?  Hmmm.  Needless to say, not highly recommended.  And I don't believe I'll be picking up another Alice Campbell book unless, like here, she's part of a three-in-one Detective Book Club offering.  1 1/2 stars.
Posted by Bev Hankins at 9:45 PM

Labels: 150 Plus, A-Z Challenge, A-Z Mystery Author, Embarrassment of Riches, Mount TBR, Mystery and Crime, Off the Shelf, Outdo Yourself

I have two by Campbell --JUGGERNAUT (her first) and DESIGN TO KILL -- lined up for this year. I take this review as a warning and will be prepared for possible excesses. Curt Evans, however, says that DESIGN is worth reading for the unconventional (for the 1930s) sexuality and the murder mystery.

I saw Curt's write up last night after I posted this. I also saw a few comments there about Veiled Murder. Made wonder if was being too harsh....but I don't think so.

The whole plot sounds a little to convoluted for my taste. If I'm reading a book with an overly complicated plot line, I at least need to like the characters. From your description, not sure I would.