The Case of the Negligent Nymph:Review 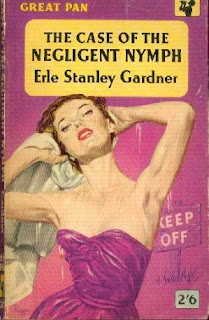 In The Case of the Negligent Nymph Perry Mason is floating in a canoe while keeping a pair of binoculars trained on the island hide-away home of George Alder.  Mason is looking for a chink in the businessman's armor--a chink that will help his clients manage a claim for drilling rights.  He's not sure what he expects to see...but he's certain that he didn't expect to see a woman swim up to the sandspit beach, climb nude out of the water, don a summer evening gown, and sneak up to the house where a party is going on.  The woman isn't gone long before she racing back to the water with a rather ferocious guard dog on her heels.  Mason decides to play gallant hero and helps the woman escape her pursuers.  What begins as a gallant act turns into a case when the girl is identified by the police and accused of robbing Alder of $50,000 worth of jewelry.  Mason gets set to defend the girl on the robbery charge (and to try and keep his identity as the "mystery man in the canoe" a secret) only to have the scene change again.  This time to murder.  Alder is found shot in his own home and the guard dog apparently went berserk in his closet in an effort get free and help his master.  The local sheriff puts two and two together and decides that the thief has turned murderer.  It's up to Mason to reveal the true killer without admitting his habit of canoeing in the evening.

This is a very solid installment in the Perry Mason series.  Not quite enough Della Street for my tastes.  I really enjoy her interactions with Perry (something that was very prominent in my first Erle Stanley Gardner read--The Case of the Grinning Gorilla last year) and would have liked to have had more of them here.  But the ending is terrific--watching Perry twist the Prosecuting Attorney and the Sheriff into knots of contradiction is worth the price of admission. A nice three-star read.

Very interesting. I want to read a Perry Mason novel this year. Don't have this one one TCOT Grinning Gorilla. Will have to keep an eye out for them.

Jeez, Bev, once upon a time I read tons of Perry Masons, devoured them like candy. And then I stopped.

Tried reading one last year and just couldn't. But this one sounds mighty interesting, I must admit.

Have you tried watching the Perry Mason movies with Warren Williams? As much as I love Warren Williams, they do leave a bit to be desired. Not WW's fault though.

No...Last Perry Mason I watched was the movies made in the 80s (still with Raymond Burr). I liked those better than the old TV show. That just didn't do much for me for some reason.

I so love these books. I still have a few more to read before I need to hunt some others down.

AS usual, the hottie client. Of course, she's scantily clad. Inevitably, she lies to Perry. Why return again and again to the Perry Mason stories that invariably feature damsels in distress, the powerful exploiting the vulnerable, and the cunning and resourceful hero who combines wise tactics and hot-headed action to make everything right in the end? Because these irresistible elements, the stuff of heroic myth, possess endless appeal. Sure, everybody wants an honest, loyal and efficient lawyer that will fight when the going gets rough. But even more, everybody wants a supporter, an advocate who knows our weaknesses like telling fibs and making messed-up choices but pleads our case eloquently and shrewdly anyway.