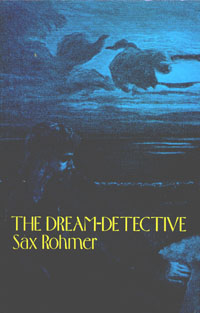 While The Dream Detective (1920) by Sax Rohmer does not feature his most famous creation, Dr. Fu Manchu, there is still the mystery of the orient and the occult about his work. It is a collection of ten short stories which features the antique dealer Moris Klaw who not only knows his stuff when it comes to the origins of relics of various kinds but also is an expert on Ancient Egypt, mystical oriental phenomena, the occult, and the supernatural. He detects using the "science" of the mental negative and the theory of the Cycle of Crime.

The mental negative refers to the idea that men and women leave their impressions behind them when gripped by powerful emotions--such as the emotions stirred up when murderers act or thieves have an obsession with a particular object. These impressions can be picked up by someone (like Klaw) who is sensitive to such things. Klaw receives these impressions best when he is able to sleep in the room where events have happened--sleeping undisturbed upon his red cushion which has been "odically steralised" so that he may have the purest impressions.

His theory of the Cycle of Crime says that certain incidents will continue to happen at various times throughout history. It may be something like a valuable jewel with a history of murder or accidents attached to it such as occurs in the "Case of the Blue Rajah" or just a type of crime that keeps occurring in specific places such as the "Case of the Whispering Poplars." He claims that the cycle is "as inevitable and immutable as the cycle of the ages. Man's will has no power to check it." Using his knowledge of historical crimes tied to objects and the history of the artifacts themselves, he's able to solve current mysteries.

The mysteries involved are somewhat in the Holmesian vein. Klaw often keeps secrets from his "Watson," the narrator of these stories, and the reader doesn't always have enough clues to find the solution. But they are full of unique personalities and interesting theories and whether you subscribe to any of Klaw's theories isn't really important to the enjoyment. One just needs a little bit of belief suspension. ★★★ for solid stories with good characterization and intriguing plots.

"Case of the Tragedies in the Greek Room": death invades the room where an ancient Athenian harp resides. Is it a curse or is there a human agent?

"Case of the Potsherd of Anubus": An ancient vase was said to be able to summon great powers for the owner. But it was broken long ago. Will it still work if all the pieces are brought together?

"Case of the Crusader's Axe": An axe with a bloody history has claimed one final victim. But the axe is too heavy for most modern mortals. Was a supernatural power involved in the murder of Mr. Heidelberger?

"Case of the Ivory Statue": A very large and heavy statue of an ancient Egyptian statue disappears from the artist's workroom. No one could have stolen it. Did she come alive and dance away?

"Case of the Blue Rajah": The best of the locked room stories by Rohmer. A valuable diamond disappears from a locked room with a room full of men. Klaw discovers how the theft was accomplished.

"Case of the Whispering Poplars": A man bent on revenge uses the haunting of a house known as "The Park" to try and kill his target. Klaw's knowledge of the hauntings comes in handy.

"Case of the Headless Mummies": No stealing this time....the villain isn't stealing mummies he or she just beheads them. Is there some ancient rite involved? Some secret of the past? Klaw will find out.

"Case of the Haunting of Grange": Sir James invites a party, including Moris Klaw, to The Grange to experience the spooky goings-on for themselves. But an evil force is at work--again trying to use the haunting for purposes of their own.

"Case of the Veil of Isis": An obsessed man is determined to summon up the goddess Isis and has gone to great lengths to duplicate an ancient ceremony exactly in order to do so. You know what they say...Be careful what you wish for....Martin Klaw is on hand to try and dispel the effects of thoughts becoming real.
Posted by Bev Hankins at 12:46 PM

Sounds like a good anthology of stories, for its time.