One Touch of Blood: Review

"It's J. B. on the telephone for you, Mr. Clark," she announced. Her excitement agitated the front of her pink blouse. She'd only been working for me a week so I hadn't gotten around yet to deciding whether they were real.

I knew exactly where I was from the moment I opened One Touch of Blood (1955) by Samm Sinclair Baker. Smack dab in the middle of a pulpy, fast-talking, B-movie-style crime novel with more mangled metaphors than the dames (the blondes, the redhead, AND the brunette) in this story have curves...and they have more curves than the winding road leading to the cliff-hanging house where the main murder takes place. Well, you get the idea.

What we've got is, as the back cover announces, a Recipe for Murder! You take one advertising man by the name of Clark Clark Clark (his father stuttered) who isn't quite satisfied with the hot blonde number he has at home...oh, he loves her all right, but there are just so many luscious ladies to behold that he's just got to hold them. Mix in a trio of wealthy clients looking for a sure-fire advertising scheme to make even more customers long for Old Rankler bourbon, a couple of buxom private secretaries (very private), add a hulk of a man who decides Clark is his best buddy (and ticket to revenge), a cop or two and let simmer until the clients who tell Clark to place this ad:

get exactly what they ask for. One murder made to order and they won't even need to look for outside help after all.

All they need to do is take the whole gang (including Mrs. Clark) to the Plupes' (makers of Old Rankler) cliff-side estate for a fun weekend of advertising brainstorming, attempts at wife- and girlfriend-swapping, plenty of Old Rankler manhattans, and a high dive exhibition by exhibit A--the soon to be very dead J. D. Plupe. Good ol' J. D. has an even harder time keeping his hands off the ladies than Clark and manages to make everyone in the party mad enough to push him off the cliff. But who actually did the dirty work? Clark thinks he's going to play detective and figure it out--but his better half fits into the shoes of Sherlock Holmes better than he does and fingers the killer in a nice traditional wrap-up scene in the end.

The verdict--yes, indeed. Pulpy, B-movie fare. But Baker provides a decent ride in this charming little B-movie-style crime novel. Sure, the dames are bouncing "their blouses full of goodies" all over the place and I'm quite sure I ought to be offended. And he pulls out more tired, stock phrases than an actor past his prime--but he introduced me to Weasel, a mountain-sized man with mountain-sized feelings who only wants to beat J. D. Plupe to a pulp because he insulted his sister. But he didn't get a chance--or so he says. I like Weasel, he's got character and a sense of loyalty that can't be beat. Then Baker escorted me into a meeting of the MWA where Mrs. Clark, wife of our hero, asks those assembled to figure out who pushed J. D. Plupe off the edge. And the authors decide that any of the participants in that weekend part could have done the job. It's a short parody of Anthony Berkley's Poisoned Chocolates Case and works pretty well. The only place he really falls down on the job is with misdirection. There isn't much. I picked out the culprit early on and I didn't feel that there was a whole lot of effort to disguise identity (although Clark tries to make it seem like a huge puzzle...I think it's just the bourbon talking). ★★★ and 1/4 for a fun, off-my-beaten-path read.

I submit this for Rich's Year in Crimes of the Century (this month is 1955) over at Past Offences as well as the "Set in the U.S. or England" square on the Golden Vintage Bingo card. 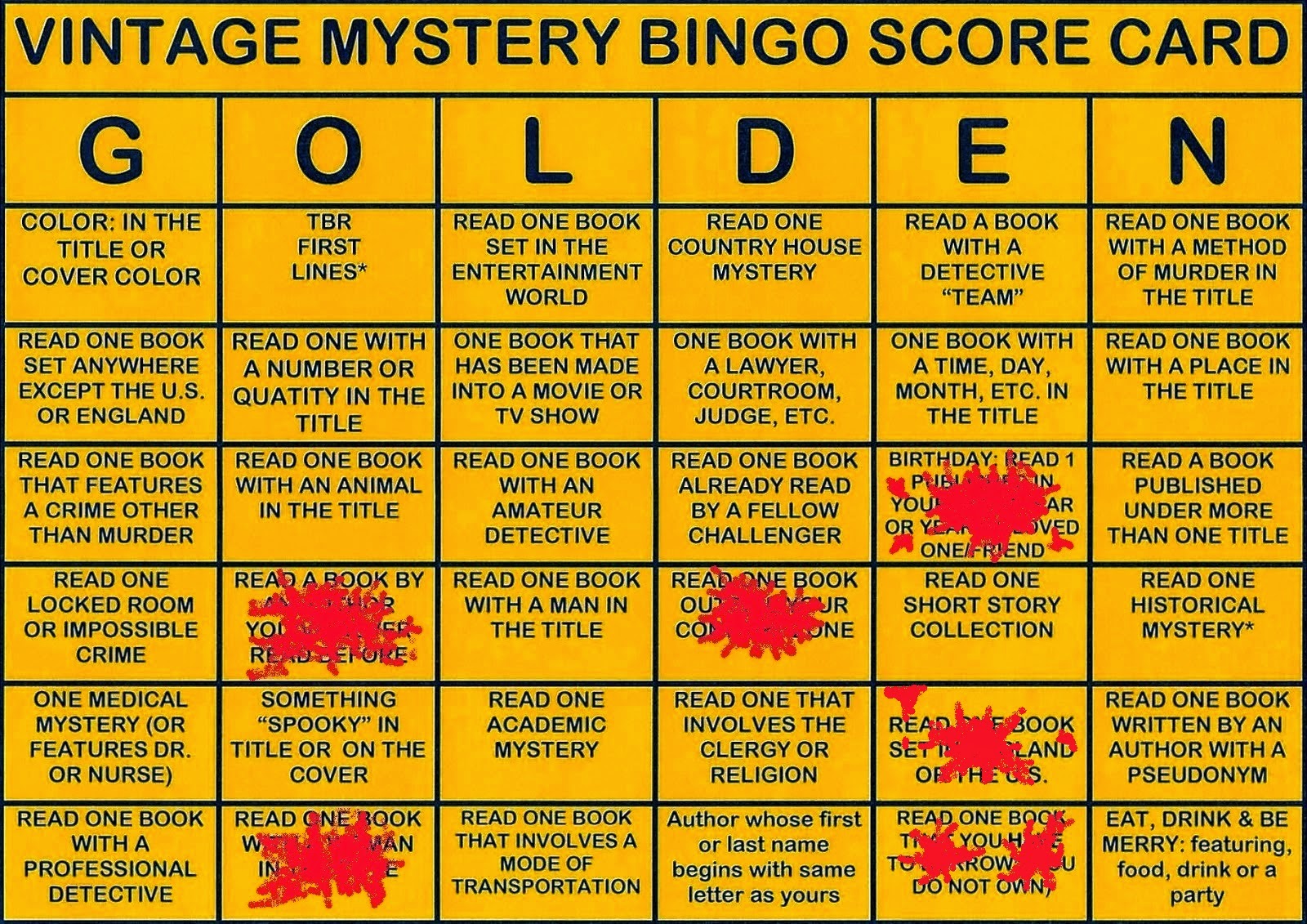 Today, perhaps the most popular reading is mystery fiction, right? Just about every magazine carries at least one mystery story. The big babies, the Post and Collier's, usually feature a mystery serial. The American has a monthly short mystery novel. Fill out the list yourself and you'll find practically every important magazine included, those catering to women as well as men. (p. 10)

[about Rocky Cove Lodge--scene of the crime] I'd been there before, but the place still looked to me like a medieval haunted house with modern plumbing. It had a dark-brown English-manor exterior, and an interior with a labyrinth of rooms, twisting all over the landscape. Maybe the general idea was to keep the right bedrooms from knowing what the left bedrooms were doing. (p. 35)

Lunch would have been more fun with a group of cadavers in the back room of a dissecting lab in a medical school. Even the Old Rankler manhattans which were a lunchtime ritual at Rocky Cove tasted like embalming fluid. (p. 85)

Most people are friends, if you only give them a chance. Don't you find that? (Weasel; p. 95)

That boy is too nervous. I don't think he gets enough vitamins, that's his big trouble. The way I figure it, them healthy little round vitamin pills lay around in your veins and keep the blood from running along too fast and getting your nerves all hot and bubbly and excited. Don't that sound logical? (Weasel; p. 133)
Posted by Bev Hankins at 8:39 PM

Labels: 100 Plus, 52 Books in 52 Weeks, Alphabet Soup, Cloak & Dagger, Crimes of the Century, How Many Books, Mount TBR, My Kind of Mystery, Vintage Mystery Challenge

I'd never heard of the author until right this minute - but this does sound like great fun Bev - thanks chum!

Some of those B movies were good so I'm thinking this will be too. It sounds good anyway. Great review!

This sounds ace, thanks very much for the review Bev.

Rich: This was fun. I parked any feminist views at the front cover and just enjoyed it for what it was.

I so want to read this one. Not sure I'll ever run across it, but I'll be on the lookout just in case.