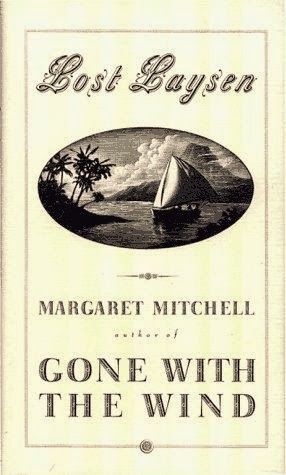 Lost Laysen by Margaret Mitchell is really two stories in one volume. The first half is a real-life love story told in letters and pictures which Mitchell's beau, Henry Love Angel, had kept secret throughout his life. When he died in 1945, Angel left behind love letters from Mitchell, photos taken over the years, and two notebooks which she had entrusted to him. Although those materials were passed on to his son, Henry Jr. did not really examine them until he heard about the Atlanta museum dedicated to Mitchell and Gone With the Wind. He decided to contact the museum to see if they would be interested in what he had.


The letters and photos tell the story of Angel's unrequited love for Mitchell and of his repeated proposals and her refusals. Though she had great affection for him--affection that is made plain in her letters, she ultimately chose to marry two other men in quick succession. She realized that her first husband had been a mistake almost immediately and divorced him. It is interesting to speculate why she did not choose the faithful Angel. And although he finally fell in love with another and married, he still remained her faithful friend, keeping her letters and her notebooks safe and secret until his death.


The second story is found in the two notebooks. Written by Mitchell in 1916 when she was just shy of her 16th birthday, Lost Laysen is a story of a spirited young woman determined to be "a missionary" to the people on the island of Laysen and the two men who loved her. One is a rough deckhand on the ship which carries her to the island; the other is a gentleman of her own class who is determined to follow her and bring her home to marry him. All three of them value honor--the men will go to any lengths to defend her honor against a villainous man and she values her honor over her life.


It is interesting to see some of the themes and characteristics which Mitchell would fully develop in GWTW here in tentative form. She's clearly a young writer, but she does an excellent job taking on the voice of the rough seaman (our narrator) and attempting to work out complex issues. An impressive early novella from a fifteen-year-old. ★★★
Posted by Bev Hankins at 10:15 PM