For fans of The Paris Wife, a sparkling glimpse into the life of Edith Wharton and the scandalous love affair that threatened her closest friendship.

They say that behind every great man is a great woman. Behind Edith Wharton, there was Anna Bahlmann—her governess turned literary secretary and confidante. At the age of forty-five, despite her growing fame, Edith remains unfulfilled in a lonely, sexless marriage. Against all the rules of Gilded Age society, she falls in love with Morton Fullerton, a dashing young journalist. But their scandalous affair threatens everything in Edith’s life—especially her abiding ties to Anna.

At a moment of regained popularity for Wharton, Jennie Fields brilliantly interweaves Wharton’s real letters and diary entries with her fascinating, untold love story. Told through the points of view of both Edith and Anna, The Age of Desire transports readers to the golden days of Wharton’s turn-of-the century world and—like the recent bestseller The Chaperone—effortlessly re-creates the life of an unforgettable woman.

My Take: Jennie Fields does an excellent job evoking the time period and the Paris setting for Age of Desire.   She can definitely tell a story.  But I have to say that I don't care much for Edith Wharton...and if Fields has done her job well, then it's not her fault--it's Edith's.  Edith is not likeable at all.  She is cruel to her husband.  She's imperious to her governess/secretary/friend.  And she's fickle with her lover. She wants what she wants when she wants it....but, wait, maybe not.  Well, not now anyway.  Maybe later.

Honestly, I was much more interested in Anna.  She's a loyal friend who tries to guide Edith and does her best for Teddy, Edith's husband.  I found myself seriously wishing that Anna would run off with Teddy (she would have been much better for him than Edith) and just let Edith do whatever with Fullerton.

I can't say that this is one of my all-time favorites.  But I heartily recommend Age of Desire to anyone with an interest in Edith Wharton or the Gilded Age just before World War I.  Three stars.

[Disclaimer: My review policy is posted on my blog, but just to reiterate...This review copy was offered to me for impartial review and I have received no payment of any kind. All comments are entirely my own honest opinion.] 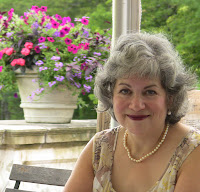 Born in the heart of the heart of the country – Chicago -- Jennie Fields decided to become a writer at the age of six and produced her first (365 page!) novel when she was eleven.  She received her MFA at the Iowa Writers Workshop and published her first short stories while spending a postgraduate year at the Fine Arts Work Center in Provincetown.  But needing to feed her family  in the era just post-Mad Men, she became an early female copywriter at an advertising agency, soon rising to creative director and moving to New York.  In her 32-year advertising career, she wrote and produced many well-known and award-winning commercials.  People even now can embarrass her by telling her they grew up dancing to one of her McDonalds’ jingles.

Still, fiction was her great love.  Writing during her lunch hour and after her daughter’s bedtime she penned her first novel, Lily Beach, which was published by Atheneum in 1993 to much acclaim.  Since then, she’s written three more novels including Crossing Brooklyn Ferry and The Middle Ages. Her latest, The Age of Desire, is a biographical novel based on the life of the author dearest to her heart, Edith Wharton.  An Editor’s Choice of the New York Times Book Review, it describes Wharton’s mid-life love affair with a younger, manipulative man.  Why the affinity to Wharton?  Because she wrote about people attempting to break society’s expectations for them – which is something Fields has been yearning to do all her life.

Praise for The Age of Desire

“Somewhere between the repressiveness of Edith Wharton’s early-20th-century Age of Innocence and our own libertine Shades of Grey era lies the absorbingly sensuous world of Jennie Fields’s The Age of Desire . . . along with the overheated romance and the middle-age passion it so accurately describes, The Age of Desire also offers something simpler and quieter: a tribute to the enduring power of female friendship.” —Boston Globe

“Delicate and imaginative . . . Fields’s love and respect for all her characters and her care in telling their stories shines through." —Publishers Weekly

Inspired by Wharton’s letters, The Age of Desire is by turns sensuous . . . and sweetly melancholy.  It’s also a moving examination of a friendship between two women. —Bookpage

“With astonishing tenderness and immediacy, The Age of Desire portrays the interwoven lives of Edith Wharton and Anna Bahlmann, her governess, secretary, and close friend.  By focusing on these two women from vastly different backgrounds, Jennie Fields miraculously illuminates an entire era. . . . I gained insight into both Wharton’s monumental work and her personal struggles—and I was filled with regret that I’d finished reading so soon.” —Lauren Belfer, author of City of Light and A Fierce Radiance

Anna was the highlight of this book for me too!

I'm looking forward to reading this book although it's good to know that Edith doesn't shine in terms of character. It can be a bit disheartening when a favorite author is shown to be less than wonderful, but it's not fair to think that because an author has a talent for writing and storytelling that they are necessarily a nice person. But then, nice people generally don't have interesting stories, I suppose.

I really disliked Wharton too-I haven't been able to read one of her books since because I still have lingering bad feelings due to this book. I hope I can get over that as I have really enjoyed Wharton's society novels and I would love to give The House of Mirth a try.