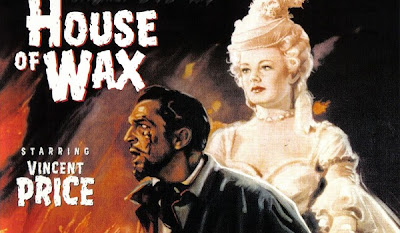 For my fifth R.I.P. Screening...and Vincent Price Marathon...I've gone back to horror that's a little more my speed.  I can remember watching House of Wax on the weekend with my parents sometime in the late 70s.  Although people who know my dad now probably wouldn't think it, he was something of a classic horror movie fan....or maybe it was just those classic movies, period.  Westerns, horror, comedy, we watched them all on the Saturday and Sunday afternoon movies.  For you youngsters, that's before the American Movie Classics channel and the like was born.  If we wanted to watch movies on television, we had to wait for "The Movie of the Week" during weeknights or stations to run classic movies on the weekends.  And no Netflix or on demand--we took what was on offer and couldn't decide, "Hey, I'd like to see House of Wax--I think I'll order that up on Netflix."

But...back from my trip down memory lane...on with the show.  House of Wax (1953) was the first 3-D color feature film to come from a major studio (Warner Bros).  It was also a major film for Price.  At the time he was also offered a role in a Broadway play by the name of My Three Angels.  Remembering what great fun he had in an earlier film, The Invisible Man Returns, he opted for the role of Professor Henry Jarrod in the 3D horror picture.  He told Cinfantastique in 1989, "I would love to have done the play, but the people who did the play--it didn't mean anything to them at all. It was a great hit but it didn't help them in their careers, whereas House of Wax changed my life." (Meikle, p. 26)

In House of Wax, Price plays Professor Jarrod--a very talented sculptor who has created very artistic and life-like figures for a wax museum in New York City of the early 1900s.  Jarrod prefers to display figures with real artistic and historical value, but his partner Matthew Burke is only interested in profits.  It's thrills and chills the public wants, not a history lesson.  When Jarrod refuses to cater to the sensation-loving public (a la Madame Tussaud's) and a buy-out option isn't possible for several months, Burke takes matters into his own hands by setting fire to the museum in order to collect the insurance. He leaves Jarrod for dead in the burning building. But Jarrod's body is never found--it is assumed that the high heat from the fire completely destroyed it.

Some time later, after the insurance company is finally persuaded to stop being fussy about the fact that Burke's partner was never properly identified as dead, Burke collects the money and is all set to head to Niagara Falls with a lovely young lady.  A mysterious, horribly disfigured man kills him and makes his death look like suicide.  There is a rash of murders followed by the disappearance of the corpses--including Burke's young lady, Cathy Gray.  Cathy's roommate, Sue Allen discovers the body and sees the man.  From then on, she is stalked and we know it's only a matter of time before she will be in mortal danger herself.

Meanwhile, Jarrod has been resurrected from the dead.  His face and most of his body seem to have escaped the flames, but his hands are of no use to a sculptor and he has been confined to a wheelchair.  He has several protégés who now do the sculpting for him and he is planning on opening a new museum called the House of Wax.  This time he plans to give the public what it wants and includes a Chamber of Horrors as well as the historical pieces.  When the museum opens, once again the figures are very lifelike--and a great number of them seem to have famiiar faces.  Sue is particularly drawn to the figure of Joan of Arc because of its resemblance to Cathy.  She becomes more and more convinced that this is Cathy's body--even though when she touches the figure, it seems apparent that it is made of wax.

It all comes down to a final scene at the museum.  Sue's beau Scott Andrews, Jarrod's newest protégé, is sent on an errand so he will miss her when she comes to meet him at the museum.  The rooms are dark and spooky and the appropriate creepy music plays as Sue searches through the museum for Scott.  There is plenty of tension as Sue awaits her fate and the police must break through several doors to get to her and the Professor.  Will they be in time?  Well....maybe you should order it up on Netflix and see.

There are a great many things that I like about this film.  I love the period setting--turn of the century is one of my favorites.  I like the fact that Jarrod wasn't an evil man through and through--yes, he was a bit odd at the beginning, talking about his figures as if they were alive, but it isn't until Burke destroys them and tries to kill him that he's pushed over the edge.  There's a bit of sympathy for the man who lost everything that meant anything to him.  A very enjoyable R.I.P. afternoon matinee. 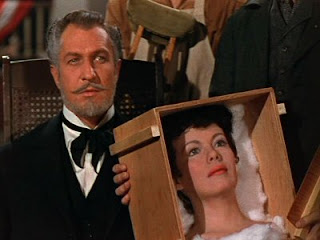 Quotes:
I'm afraid that the visit of a such distinguished critic may cause my children to become conceited. To you they are wax, but to me their creator, they live and breathe.  [Professor Henry Jarrod]

I'm moving up honey, no girl ever hits the jackpot till after she passes 14th street. [Cathy Gray]

I'm going to give the people what they want--sensation, horror, shock. Send them out into the streets to tell their friends how wonderful it is to be scared to death. [Jarrod]

It's sort of a shock to see your head detached that way.  [Sue Allen]

That's a copy of her face alright, but she didn't look that way the night we saw her at Ma Flannigan's rooming house. [Sgt. Jim Shane looking at the wax figure of Joan Of Arc who resembles Cathy Gray]
Not so composed, huh. [Lt. Tom Brennan]

That look of horror spoils your lovely face--what if it should show, even through the wax?  [Jarrod]


{All factual information courtesy of Wikipedia and Vincent Price: The Art of Fear by Denis Meikle}
Posted by Bev Hankins at 3:45 PM

Oooooh, I remember when this movie first came out Bev. I went with friends to the theater and wound up covering my face for most of the movie. I can honestly say I was there in the theater, but that's about it.

For whatever reason I've never been able to watch this on television either. I'm a chicken.

I mostly love Vincent Price in his earlier roles as gigolos and scoundrels. If I'd known there was a Vincent Price Blogathon going on, I'd have written a post. :)

Yvette: It's actually my own little mini-VP-thon....I'm a weenie when it comes to real horror, so I'm watching VP films for the R.eaders I.mbibing P.eril event (R.I.P. Peril on the Screen portion). Here's the original post: http://myreadersblock.blogspot.com/2012/08/readers-imbibing-peril-vii.html

Great fun Bev - I had the great good fortune to see this in 3-D in London several years ago - the audience just whooped during the bat and ball intermission! Did you ever see the original 1930s version? It is also highly amusing, in its own wisecracking way.

I've seen bits of the original. Didn't sit down and watch all of it since I'm trying to squeeze in as many Vincent Price films as possible.

If you are still in a Vincent Price frame of mind, see if you can find The Bat with him and Agnes Moorehead. It's the movie version of The Bat by Mary Roberts Rinehart.

Ryan, I watched The Bat earlier this year when I read the book. Good stuff!