The War of the Worlds Murder: Review 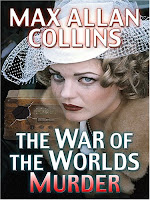 Unlike the Sherlock Holmes pastiche of a similar name (which I read last year), The War of the Worlds Murder by Max Allan Collins does not take place in the world of the H. G. Wells classic. At least, not exactly. This story revolves around the historic Mercury Theatre radio presentation of The War of the Worlds by Orson Welles which caused mass panic in 1938. It features Welles, John Houseman, and Walter Gibson (aka Maxwell Grant), creator of the Shadow, among other historical figures. And, as in his other "disaster" mysteries, Collins uses an author of detective fiction (in this case, Gibson) as his amateur crime solver.

The first half or so of the book is spent in build up. We are introduced to the characters and given a very plausible set up for the murder. Collins gives us a look at the creative spirit of Welles and how the dramatic production of the Martian invasion came about. Gibson is brought into contact with Welles when he (Welles) decides that it would be a great idea to collaborate on a Shadow movie, as a natural extension of the successful radio show. Then Gibson (and through him, the reader) is introduced to the worshipers, admirers, hangers-on...and even possible enemies of the brilliant young actor/director.

Just as the radio production is about ready to go on the air, Welles, Gibson and Houseman discover the body of a young woman in one of the empty sound rooms. She had been the latest in a long line of Welles flings--just recently given the heave-ho. There is blood everywhere and and an incriminating knife that points straight at Welles. The door is locked (but there is a window which has given them the view)...and by the time the security guard can be summoned to bring a key the body and the weapon have disappeared!

But you know what they say in show business...the show must go on. And so it does. One of the most historic radio programs ever goes on the air and panic takes over the country as thousands believe that the Martians are really invading. In the midst of all this, Gibson is watching, thinking and gathering clues to the real disaster that has taken place off-stage. Who killed the young woman? Was it someone trying to frame Welles--or has the actor/director (and amateur magician) pulled a conjuring trick of his own? And what happened to the body? By the end of the evening Gibson will have answers to all these questions.

Collins, as always, has done his homework--and that is quite evident. Historical and anecdotal details are superb. The tale of the panic-inducing radio broadcast is quite interesting. And exciting--as Collins takes us from snippets of the broadcast to scenes from the world outside the broadcasting studio. He uses stories of actual audience reactions to show how effective the broadcast was. The murder mystery itself leaves a bit to be desired. It's not nearly as good as either The Titanic Murders or The Hindenburg Murders, for instance. But for a look at the world of 1938 and particularly for a look at what happened when Welles allowed the Martians to invade...it's very good. Three stars for a good solid story overall.
Posted by Bev Hankins at 7:28 PM

I have a bunch of these books. I've read THE LONDON BLACKOUT MURDERS and THE TITANIC MURDERS. Just last week when I was in North Carolina I found a brand new "used" copy of THE LUSITANIA MURDERS which has Willard Huntington Wright (AKA S.S. Van Dine) as the detective. I'd been looking for that one for a while.

When I met Collins at Bouchercon last year I told him that I liked the one with Agatha Christie as detective (THE LONDON BLACKOUT MURDERS) the best. He told me that of the "disaster" books that was also his favorite because it was based on a true crime case that to this day remains unsolved and he got a chance to come up with the solution.

Must get my hands on the Blackout book! Although, I am intrigued by The Lusitania one as well....

never read Collins but I just got his KILLED IN THE COMICS. I'm a huge Orson Welles fan and I enjoyed the Kamisky and Baxt historical pastiches greatly so I'll see about tracking this one down too - thanks Bev.