Murder With a Past 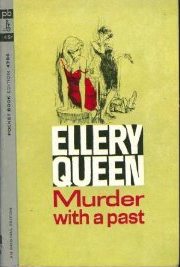 Murder With a Past by Ellery Queen.  One of the few Queen novels I've read that has not starred Ellery Queen, mystery author and amateur detective, and his father Inspector Queen.  In this novel Dave Tully comes home from a business trip to find his house dark and his wife gone. Not exactly a panic moment--but highly unusual.  Ruth is rarely not home to greet him.  He's just mulling over whether it's her bridge night and perhaps she's stayed for "just one more hand" when his friend Lt. Julian Smith, a local policeman, pulls up.

That's when the panic sets in.  Because Ruth is missing and there is a dead man named Crandall Cox.  Cox's body has been found at a nearby hotel--with Tully's gun beside him and having shouted out "Ruth" before he died.  All the evidence points to a clandestine meeting in a cheap hotel gone bad.  And all that evidence seems to point towards his missing wife.  But Tully refuses to believe that his wife is a cold-blooded killer and sets out to prove the evidence wrong.  But if Ruth didn't do, then where is she?  Why doesn't she come home?

As mentioned, this is one of the few (four to date, I think) non-Ellery Queen centered stories I've read that was written under the name of Ellery Queen.***  And, I'm coming to conclusion that I'm not a big fan of the non-Ellery books.  It's meant to be an entertaining thriller with all the suspense of the man sure of innocence--this time of his wife rather than himself--taking on the world to vindicate her.  The further he digs, the more evidence seems to pile up against the missing woman.  There is the whole race against time element which goes further than him trying to find the answer before the police find her (I won't spoil the twist and tell you what other race is going on).   Admittedly, there are moments.  But, overall, the mystery seems rather pedestrian. There is that slight twist at the end--which was probably a bit more effective at the time (or would be more effective for someone who has read less detective fiction).  But too many crime novels have gone by for me to be overly impressed.  More connection with the characters would have gone a long way towards upping the impression factor.  Two stars out of five.

*** My good friend, Sergio from Tipping My Fedora, has pointed out (in the comments below) that this is actually one of "Ellery Queen" stories that appeared under that name but was NOT written by Dannay and Lee.  That certainly explains a lot.
Posted by Bev Hankins at 1:26 PM

Labels: 150 Plus, Antonym Challenge, Off the Shelf

Hello Bev - I thought you'd be interested to know that this is one of the 'Ellery Queen' novels not actually written by Dannay and Lee. In the 1960s a series of about 30 paperback originals were published using the the Queen soubriquet as a house pseudonym for a variety of authors. In the case of this paticular mystery, the author was acually Talmage Powell. Other witers who supplied books under the name included Henry Kane though the majority were by Powell, Jack Vance and Richard Deming. Of these I particularly liked the titles featuring one-eyed detective Tim Corrigan.

All the best,
Sergio

Well...that certainly explains alot. :-) Thanks for the info, Sergio. I'll make a note of it in the review.