Dracula by Bram Stoker is the classic horror story.  No sparkling boy-vampires here.  No teen angst.  Just plain and simple, down-right nasty evil--the Master of the Undead and the "children of the night" (read wolves).  This vampire story, despite all the in-depth criticism and literary analysis, is not about seduction.  It's not sexy.  This is Count Dracula in all his baseness wanting to exert his mastery over the human race and to make everyone--especially Mina Harker--do his bidding and become like him.  He doesn't want Mina Harker because he wants to thrill her with his all-powerful, undying masculinity.  He wants first to punish her for interfering with his plans and then to make her his creature to in turn harm her husband and the others in their small group of crusaders.

Dracula is one of those stories that you assume that everyone knows.  It has been such a part of our culture--from Bela Lugosi's Dracula of the 1930s to the 1992 "Bram Stoker's Dracula."  Stoker's version may not be the very first vampire story--but it is the one that set the standards for vampires.  We all know how vampires behave because of this novel--they can change form (primarily bats and wolves), they are stronger than normal men, they are strongest at night (and in some cases can't bear daylight), they must have their native soil with them for strength, they can almost hypnotize their victims when overpowering them, they can't stand garlic and crosses and other religious icons.

This story tells us about Jonathan Harker, a young lawyer, who is sent to Transylvania to complete business affairs for a mysterious Count.  Count Dracula has plans to leave his native land and take up residence in England.  Harker and the office he works for have been procuring a house for the count and he has brought the final paperwork and summary of preparations for the count to sign and approve.  Harker's journey to the castle home of Count Dracula should warn him of what is to come.  The residents of the surrounding town and his fellow travelers all make signs to ward off the evil eye and his driver and the horses are more and more nervous the closer they get to castle.   Once at the castle, Harker notices that his host never eats with him and he discovers that the man casts no shadow and no reflection in the mirror Harker has brought to shave with.  Soon he finds that he is a prisoner in the castle and the Count does not intend that he will ever leave.  The young lawyer fears what fate awaits him at the hands of the Count...or the evil women who also inhabit the castle.  Harker makes a daring escape by climbing out a window and down the sheer castle wall below.

The story shifts to England where Harker's fiancee, Wilhelmina Murray is visiting with her dear friend Lucy Westenra.  Lucy has not been feeling well and falls into an old habit of sleep-walking.  Mina tries to restrain her, but Lucy cannot seem to resist the urge to walk at night.  Mina finds her one night up at a favorite sitting place--very weak and pale.  Dr. Seward is called in to examine her, but he cannot find a cause for her weak health.  He is mystified by odd puncture wounds in her neck.  He in turn calls upon his mentor, Professor Van Helsing to attend the girl.  Van Helsing is appalled at her state of health and eventually calls upon her fiancee, Lord Arthur Godalming (as well as Dr. Seward, Quincey Morse (another admirer of Lucy's) and himself) to give the young woman blood transfusions....all in a vain attempt to save her life.  But the blood of four good, strong men is not enough to save her and soon they are laying her to rest in the family vault.

Meanwhile, Harker has made it back to England--albeit unwell and delirious--and Mina had gone to his side to nurse him back to health. She is away when her friend dies.  It isn't long before children begin wandering off and when found they exhibit similar neck wounds to those found on Lucy.  All they can say about their experience is that they were lured away by a "bloofur lady."  Seward, Van Helsing, Godalming, and Morse band together to seek out the "bloofur lady"--and incident that will bring much heartache to Lord Godalming.   Harker recovers from his trauma and he and his now wife, Mina meet up with others.  They pool their stories and recollections of the incidents and Van Helsing convinces them that they must now go after the source of the trouble--the mysterious Count.  The rest of the book revolves around the group's efforts to thwart Dracula and end his reign of terror.

Told in the form of letters and diary entries, Stoker uses the various points of view very effectively.  Switching often from Harker's journal, Mina's letters and diary, Lucy's letters, and Dr. Seward's journal, we see events as they happen and sometimes from more than one perspective.  It is a very well-rounded method of story-telling--and quite good when done well.  As it is here.  Stoker manages to build the suspense and horror without the blood and gore and shock techniques often found in modern horror stories.  His use of atmosphere is superb.  A long, sometimes dense classic--but well worth the investment.  Four stars.

Two more comments:  First--my initial contact with the Dracula story was in an illustrated children's version (what would now be considered a graphic novel--although I don't believe that term was in use back in the dark ages when I was young).  Having now read the entire classic novel, I am amazed at how well done that condensed version was.  It was a very short paperback book--no more than 70 pages, I'd say--but it hit all the most important points.  And didn't skimp on the palpable horror either, I'm thinking in particular of the scenes with the "bloofur lady"--kids in the "dark ages" were apparently expected to be up to the challenge.  Here is a link that Pendulum Press classics illustrated edition.. 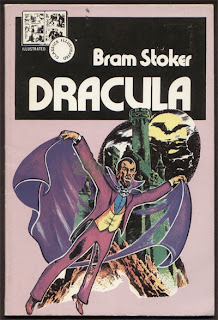 And....One of the main reasons I'm reading this now is for the Man of la Book's League of Extraordinary Gentlemen Challenge (among others).  Having read the graphic novel of The League of Extraordinary Gentleman (and not being extraordinarily impressed--click title for review), I just want to emphasize that I'm really unenthused with Alan Moore's vision of Mina Harker--er, Murray, since he has her divorced from Harker.  I'm not going to claim that I entirely endorse the Victorian view of women that Stoker presents--women as the angel of the home, bringing sweetness and comfort to their men.  A good woman giving her man "heaven on earth."  But he (Stoker) does get some kudos for showing Mina to have some brains and to be the true heroine of the novel.  I digress.  The point is, if we go with her creator's vision--she IS a very sweet woman.  She truly loves and is devoted to both her friend Lucy and her husband Harker.  And there is no way on earth you can get me to buy into the sour-faced wench that Alan Moore & Kevin O'Neill (illustrator) has given us in League.  I still say she looks like she's got a poker shoved where the sun don't shine.  Yes, she's a strong female character--but Stoker gives us that with sweetness, not as lemonade with no sugar.

Terrific review, Bev. Well, you know I love this book. It's listed on my 100 Favorites! I'm thinking I'm going to reread DRACULA at some point. Maybe as we get nearer to Halloween once again. It's SUCH a fabulous book that I don't think one reading is quite enough.

I wish you'd told me what books you disagreed on when you read my list. It's always fun to get a differing point of view.

I was kind of afraid of your opinion because I kind of know you've read just about everything. :)

I have never read this book but I dind't realize it was so dark and scary. It's classic, so I might pick it up someday even though I'm not into the scary.

I find it strange when people say that Bram Stoker set the standard for how vampires behave (and you're far from the first person I've heard say this!). I don't see vampires as having any such standards. I mean, look at Anne Rice's vampires. They can't change form, they don't need to sleep in soil, garlic and religious things don't hurt them... And I'd say Anne Rice's vampires are just as important to vampire canon as Bram Stoker's.

As you may have noticed, this is a topic I put way too much thought into... :P

I love this story and have tried reading this book several times but the older language always make me give up about halfway through. Kudos to you though for finishing it! I'm determined that I will finish it one day.....

I adore this book and never get enough of it. Like Yvette, I think I may have to reread it around Halloween this year.