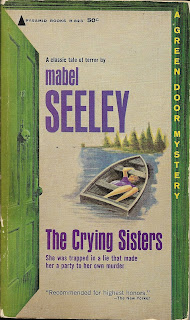 The Crying Sisters (1939) by Mabel Seeley

Janet Ruell is a small town librarian who is taking her first vacation without her mother. She's escaping her humdrum, rural life where the most "exciting" thing to happen to her is a proposal from the dull, older banker (the only eligible bachelor in town). She's determined to accept the attentions of the first man she meets and to take on any adventures that come her way during her month's stay in northern Minnesota. She gets her chance at both when she makes an unexpected stop at a small tourist camp along the way.

There she meets Steve Corbett and his young son "Cottie." She is immediately charmed by the little boy--though not quite so much by his father. Steve is a man of little words, short-spoken, and often mysterious. But he offers her an adventure of sorts--come with him to Crying Sisters lodge and look after his son. When she agrees (unaccountably after the rudest offer ever made), she finds herself stepping into a life of deception--pretending to be Steve's wife and the mother of Cottie. As soon as they are installed in their cabin, Steve hands her a gun--to protect herself and the boy--and starts making late-night excursions around the camp. He won't explain anything and tells her to just keep her mind on the boy and her nose out of his business. Before her adventure is over, she hears screams in the night, stumbles over a dead man who disappears and then reappears in the most unlikely places, is locked up with Steve as possible murderers, becomes briefly associated with gangsters, witnesses an explosion at the gambling den across the lake, and shoots a crazed killer. She certainly gets her wish for excitement in spades....

I seem to be in the minority on Goodreads (not rating this a three or higher)...but I honestly could not get over the opening and the heroine's whole reason for getting mixed up in this murder mystery. Here we have a supposedly level-headed librarian who just ups and goes off with a surly man she just met and winds up pretending to be his wife and mother to his small son. She's sure he's up to something, but she is so starved for adventure in her life that she's going along with it. Really?! And then, of course, once the nasty things start happening, she's gotten so attached to Cottie that she can't possibly leave. Again, really?!

The mystery plot itself is fairly solid. I did think throwing in the obvious red-herring gangsters was a bit much, but other than that, it was a nice, tidy mystery with a decent amount of clues sprinkled around. The reader might not figure out the whole story, but there is enough to point in the right direction if you know what you're looking at. I enjoyed that part of the book the most and have given all the star-rating based on plot alone. If our protagonists had been more engaging and the behavior of Janet had been more believable, then the rating would be higher. I will say that I do admire her strength at the end--managing to foil the murderer's plan to leave her to die and shooting the villain in turn. But, not enough to change the rating. As it is...★★

~~Spoilers ahead! Continue at your own risk.~~

I also find the sudden romantic ending to be totally unbelievable. Here's a man who has gone to all this trouble to search for his wife and has constantly been more than rude to the woman currently caring for his son and out of the blue he just proposes to her? Sure--maybe he's trying to keep his distance from her to keep her and Cottie safe. But there is absolutely no undercurrent of feelings between these two people. If you want a romantic ending, then please lay a little groundwork for it. Even if it's just a few hints of romantic tension here and there. But don't just give us nothing...

Quotes
First Line: I still pinch myself and say it isn't true.

Small towns never forget, not when they can take malicious triumph in remembering. (p. 8)

Last Line: As well as I could I curved my bandaged hands upward around his face.

Thanks for the review! I have two Mabel Seeley's - one I have read (Chuckling Fingers) and one in the TBR pile (Eleven Came Back). Chuckling Fingers was good, replete with a genealogy chart of the family and maps of the crime scenes. The odd title is from the name given to some peninsulas sticking out into the lake (Fiddler's Fingers) and the "chuckling" sound the waves make breaking against them.

Wow! I definitely don't think Janet would fare well with my criteria for a good female sleuth!
Bryonic romantic leads can be a bit tricky to use well, without leaving the female look a bit of a nincompoop. Even Mr Darcy, (not quite Bryonic but certainly rude and taciturn), wouldn't act like Steve lol

Rick: Eleven Came Back is my favorite of Seeley's so far. Chuckling Fingers was also good. This one--not so much.

Kate: No, Janet, definitely doesn't come off with high marks for female sleuth. I do give her credit for sheer guts at the end though--she's determined not to let the killer do her (or Steve, for that matter) in.

Well at least that's something Bev!