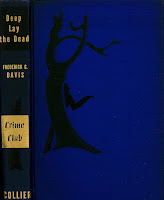 Rigby Webb, gifted math instructor, is quite sure that someone is sabotaging his life. It started when the job he thought was secure was pulled out from under him. And when he applied for other jobs--even though interviews initially went well--it seemed he just wasn't what the employer was looking for. Then out of the blue he gets a letter from Dr. Duncan Chandler, talking to him like they're old friends and inviting him to his home in rural Pennsylvania to work for him on some mysterious project.

Rigby heads out there, struggling through a snowstorm, but not (he tells himself) to take the job. He wants to give this Chandler fellow a piece of his mind and tell him to stop messing with his life. Because he's as sure as sure can be that Chandler has arranged for him to be out of work so he'd have to take the job. Once he arrives, Dr. Chandler reveals that the reason he's been maneuvered into coming is that his country needs him and they couldn't be obvious about it. Rigby wrote a ground-breaking article on ciphers and codes and the government wants him to help Dr. Chandler (who is pretty spiffy with codes himself) develop an unbreakable code that can be used to defeat the Axis powers.

Meanwhile, Chandler's wife Claire, has been feeling neglected because her husband shuts himself up in his office for hours on end and has once again invited a houseful of weekend guests to keep her amused. We have Nick Winston who may or may not be having an affair with Claire; Tony Raye, a dancer with a gambling problem; Erica Kerrington, Tony's dance partner and possible girlfriend--though she's had her eye on Rigby for quite some time; Arnold Barclay--man about town, society gossip extraordinaire, and host of "The Midnight Tattler" radio show; and Jill Chandler, the daughter of the of the house. Into the mix is thrown Max Harwick, a talented pianist until an accident forced Dr. Chandler to operate and amputate some of his fingers, and Harwick's son Ross who is representing his father in a negligence suit against the doctor. The Harwicks had come to try and convince Chandler to settle out of court and are forced by the snowstorm to stay for the weekend.

Added to the tension of a house party trapped by the snow--and making do with no electricity in the bargain--are various other factors from the possible affair between Nick and Claire to the open hostility between Tony and Arnold (Tony blames Barclay's gossip mongering for the break-up of his marriage) to the Harwicks' anger at the doctor. To make things even more interesting, Dr. Chandler receives word from Washington DC that there is a spy in their midst and a courier is on the way with proof of identity. But the courier is shot and killed as soon as he comes within sight of the house. And he's not the first to die...Dr. Chandler's previous assistant was killed in a very suspicious car "accident." Chandler and Webb are working against the clock to complete the code--all the while knowing that a spy is working against them and willing to kill for what they want.

Rick Mills recommends reading this when you have a blizzard brewing. Well...Indiana doesn't seem to believe in real, snowy winters much anymore, but the first little flurry of flakes made me think it was time. This is an enjoyable little mystery that ticks of several boxes on the vintage mystery reader's favorite's list: Country house scene? check. Snowbound and cut off from help? check. Small group of suspects? check. Suspicious circumstances all around? check. Davis fixes us up with some interesting and likeable characters as well as a truly despicable villain (once all is revealed). A nice classic good versus evil setup with a satisfying denouement. ★★★★

Quotes
First Line: The snow started coming down at exactly the wrong time, shortly before noon, just as Rigby Webb rolled out of the Holland Tunnel, westward bound.

Everybody pretends to despise gossip, but everybody strains their ears to hear it and runs to repeat it. (Arnold Barclay; p. 149)

Last line: A snowplow was boring down the road.
Posted by Bev Hankins at 3:47 PM

Great review, thanks for sharing

Thank you for this great review! I have read this one seven times, each time during a snowstorm! It is great to see the familiar characters from a fresh perspective. (I always think of Max Harwick smashing the phonograph record)! I wanted to see what else Davis wrote and did an eBay search for his titles - wow! some lurid old pulps! "You'll Die Next!" "High Heel Homicide" "Let the Skeletons Rattle" and "The Graveyard Never Closes". Good stuff!