Tragedy at the Unicorn 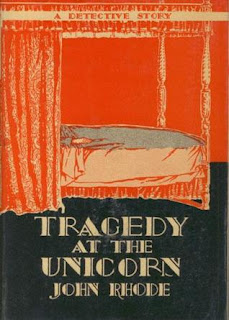 The titular tragedy involves the murder of the perfectly odious Dr. Grinling at the Unicorn Hotel in the coastal city of Clayport. The Unicorn is owned by Mrs. Burgess and the guests are tended to by her two daughters, Phyllis and Joan. Of the guests who spent the fateful weekend in Clayport, Dr. Grinling and his valet Ferguson were the only ones who weren't there for the end of the yachting season. The yachting group includes Grinling's nephew Richard Gateman (who is in love with Phyllis); the group's first mate (and our narrator) Mr. Attercliffe; Percy Hunter, a serious young man in love with Joan; Mr. Mortimer, a fellow boatsman; and Bob Weldon, the skipper of the yachting crew.

Grinling's appearance at the inn is a surprise--and not a pleasant one it seems. After an evening of high-spirited entertainment, unattended by Grinling and his man, the doctor is found dead behind his locked bedroom door. At first glance it looks to be a suicide or accidental death from a heroin overdose. Dr. Murchison (called in to examine the dead body) is not surprised that the doctor was dosing himself with heroin for sleeplessness. "A doctor might very well prescribe for himself heroin injections for sleeplessness. He would have no difficulty getting the stuff, and he would know it would do him no harm unless he took an overdose." (!) However, the postmortem reveals that Grinling didn't die from heroin after all--but from "an over injection of morphia, which as you probably know, is a far more dangerous drug." [So, yeah, in the 1920s it's no big deal to take a dose of heroin to go nighty-night--but stay away from that morphine.]

Neither his nephew Richard nor Dr. Priestely once he's called into the case believe that the doctor took morphia by mistake or committed suicide. In fact, Richard admits that he had an unpleasant interview with his uncle regarding money. You see, Dr. Grinling had a life interest in an inheritance from his father (Richard's grandfather) and Richard would inherit the principle once Grinling was gone. Not only would the doctor not loan Richard any money based on his prospects--but he declared his intention to live as long as possible to keep his nephew from the money as long as possible.

But Richard isn't the only one in the inn that night with a motive to hustle Grinling into the grave. Pretty much everyone except our narrator Attercliffe had reason to wish the doctor dead--even the ladies of the house. Dr. Priestley will have to sort through the motives as well as determine how the killer got into the locked bedroom before his work will be done.

There seems to be no thought of fingerprints. I realize it's early days in police forensics, but the Scotland Yard Fingerprint Bureau was established in 1901. When Superintendent Collison arrives on the scene, he handles the syringe and the glass vial with no precautions at all. In fact, beyond sending those things to be analyzed by the doctor, he doesn't seem terribly interested in looking over the scene of the crime for clues at all. His method is chatting up all the suspects and making them think he's not the sharpest tool in the drawer. He soon proves them wrong and, even though he does need Dr. Priestley's help, he winds up being a very capable detective indeed.

The early part of the story is quite good. Rhode builds up the various motives in a very convincing manner in an effort to spread the wealth in the suspicion department. To be quite honest, I spotted the culprit quite early despite the publisher's blurb on an early edition proclaiming "The reader who detects the murderer is to be congratulated on possessing no ordinary astuteness." The only thing I couldn't quite figure out was how the murderer managed to get in the room considering certain obstacles. The second half of the book presents some difficulties as the investigators seem to get distracted from the murder inquiry by the injection (no pun intended--well, maybe a little bit intended) of a drug-smuggling sub-plot.

The best part of the book is the humor. The underlying humor in Collison's interactions with the suspects. The reader realizes how astute the detective is and it's humorous to watch the reactions to his methods. There is also a good deal of humor in the interactions and byplay between the yachting group. All good fun. ★★★ and a half stars.

Quotes
[First Line] Clayport, althought not one of the best-known yachting centers on the south coast, is pretty popular among the owners of small craft.

Dinner is undoubtedly a meal to be enjoyed in brilliant company, but breakfast--breakfast is a solemn function to be performed in monastic seclusion. (p. 17)

I'm very pleased to hear you say so. Murder's an ugly word and it's the last thing I should like to hear whispered in connection with the Unicorn, for which I have the deepest regard. But you know what one's superiors are. As soon as I report that we can't quite fathom the cause of Dr. Grinling's death, some fellow in an office, always on the look out for something sensational, is bound to ask, "How do you know he wasn't murdered?" (Superintendent Collins; p. 44)

Mrs. Bunce suffers too severely from the rheumatics for her to go gallivanting about the house with lethal intent in the small hours of the morning. (Collins; p. 48)

I didn't know, Mr. Attercliffe. But in my profession one soon learns the value of a little harmless bluff. (Collins; p. 54)

I'm no mathematician, but it two heads are better than one, then it seems to me that half a dozen heads must be better than two. (Collins; p. 61)

Why the man's a natural detective!...Don't you see that his innocence is assumed so as to get the truth out of each one of you? (Harold Merefield; p. 72)

We shall probably discover that Mortimer had some motive for wishing Dr. Grinling out of the way; it seems a fashionable complaint in this part of the country. (Merefield; p. 93)

That evening Mr. Gregson arrived at the Unicorn. I took an instant dislike to him, though I should find it difficult to explain exactly why. Perhaps it was because he disapproved of everything he saw, and managed to convey his disapproval so obviously. (p. 107)

...when I first described the circumstances of Dr. Grinling's dead, he remarked that if a crime had been committed, it had been thought out by a man with some imagination. A novelist is popularly supposed to have imagination, and I rather think he wanted to gauge the depth of yours by reading your book. (Merefield; p. 119)

[Last Line] It was two o'clock before we finally decided that it was time to go to bed. And then the Skipper pushed Richard away from the piano and slowly and hesitatingly, with an expression of rapt concentration, picked out with one finger the notes of the Wedding March.