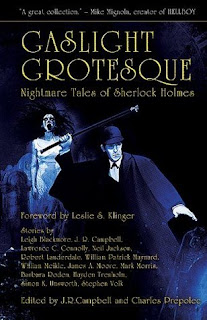 Gaslight Grotesque: Nightmare Tales of Sherlock Holmes (2009), edited by J. R. Campbell and Charles Prepolec, is a walk on the wild, gruesome, slightly supernatural side with the great detective. There's murder galore--but it's not always human agents at work and even Holmes has his faith in pure logic shaken at times. As with all short story collections some of these work better than others and I can definitely say that I preferred the ones that did not mess with the Holmes canon. Not one, but two of these stories tell us that Watson flat-out lied to us about the Hound of the Baskervilles. I'm perfectly happy to have Holmes pastiches address all those stories that Watson tells us "the world is not yet ready for," those that get a passing mention in the original works. Or to have brand-new stories featuring Holmes at work in the horror and speculative fiction realms. But don't tell me that Watson got it wrong--whether deliberately or because Holmes didn't tell him the truth or whatever. I'm not buying it.

Another thing I'm not in the market for is a story that tells me that Moriarty also survived the Reichenbach Falls without supernatural intervention. Given the nature of the collection, I might believe that Moriarty survived zombie-fashion or was a vampire who could only die with a stake through the heart or some other-worldly creature took over his body--but don't tell me this normal human fell down the falls, bounced off a couple of huge rocks, and somehow survived to take revenge on Holmes. Just don't. We've already bought the Holmes return from the dead story and there's only so many impossible things that can be believed before...or after...breakfast.

Beyond that, there are some ingenious and haunting stories including "The Death Lantern" by Lawrence C. Connolly where Holmes, Watson, and Lestrade watch a man die (repeatedly) on an early version of the silent movie. But is all as it seems? Other favorites are listed below with brief synopses.

“The Tragic Case of the Child Prodigy,” by William Patrick Maynard: A ruthless man uses diabolical means to control the mother of a young violinist and the wealth generated by the prodigy.

“Celeste,” by Neil Jackson: Holmes and Watson are delegated by the Prince of Wales to discover the mystery behind the abandoned ship. There are some secrets that are better left alone....especially if you don't burn the secret up with fire once discovered.

“The Affair of the Heart,” by Mark Morris: In which a human heart is delivered to Holmes and he and Watson find themselves involved in a time loop of sorts. Once they know whose heart it is will they be able use the time loop properly to save him/her?

“Mr. Other’s Children” by J. R. Campbell: finds Holmes in a particularly nasty situation. Having correctly identified the evil at work, he is unable to stop its escape into the world at large. Quite a horrific note on which to end the collection.

This reminds me of a Lovecraft & Doyle inspired anthology with contributions by mostly American writers that I bought and read several years ago: Shadows over Baker Street (2003). Do you know that book? Some of those stories had cameos of other writers' Victorian era characters like Dr. Nikola and Dorian Gray. Some of them also messed with the canon. What can you do?

I went to look this up to see who the writers are besides those you mentioned. I recognized not one name other than Leslie Klinger who wrote the foreword. Most of the writers are members of a Calgary based Holmes fan society and I'm guessing that nearly every contributor is Canadian. What surprised me was that there are four other books in this series of Holmes homages! Based on the titles and subtitles of each volume apparently all of them have supernatural or dark fantasy themes. I'll have to check if any of them are in the CPL system.