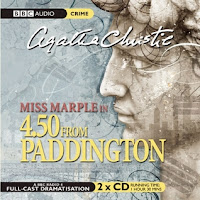 4:50 from Paddington (1957) is one of Agatha Chritie's novels that I have read far less often than others (say...And Then There Were None or Murder on the Orient Express). I have watched various productions of it...including the farcical Margaret Rutherford version (which, apart from squishing Elspeth McGillicuddy and Lucy Eyelesbarrow's parts into Miss Marple and throwing in the extraneous Mr. Stringer, is actually fairly faithful to Christie's plot)...and Joan Hickson's version several times.

I've been rereading Christie's novels in publication order, but I'm afraid I've jumped rather ahead with this one. Fortunately, it's a BBC full-cast dramatization so I will feel fully justified in reading the complete novel when I reach that point in Christie canon.

The dramatization stars June Whitfield as the deceptively mild Miss Marple who takes on the case once her friend Elspeth McGillicuddy reports that she's just witnessed a murder while traveling on the train to visit Miss Marple in St. Mary Mead. As she looked out her compartment window at a train traveling on a parallel line, a window blind suddenly flew up and she saw the back of a man busily engaged in strangling a young woman. But after reporting the incident to both the railway officials and the police and an investigation by both parties, no evidence of a murder is found. It's suggested that perhaps Mrs. McGillicuddy misinterpreted what she saw--but Jane Marple knows her friend Elspeth. And if Elspeth McGillicuddy says she saw a woman being murdered, then obviously there is a dead body that just hasn't been found yet.

After determining the best place to pitch a dead body off the train, Miss Marple dispatches her young friend Lucy Eyelesbarrow (housekeeper extraordinaire) to work for the Crackenthorpes. Luther Crackenthorpe owns the country home that lies along the tracks and our sleuth is convinced that the woman's body is somewhere on the property. Of course, she's right--but tracking down both the body and the killer is going to be tricky. Especially if she's to find them before all of the Crackenthorpes go the way of the young woman on the train.

This was a very entertaining production by a talented group of actors. There was, of course, some paring down of the plot to accommodate the dramatization (rather than a full narration of the story). But the cuts that were made were hardly noticeable and didn't change the story in any real way. An enjoyable way to spend a mysterious evening. ★★★★

I've got quite a chequered history with reading Agatha Christie novels. I think I read too fast to pick up the clues so then the mysteries don't add up? I like the idea of a cast recording audiobook, especially if June Whitfield is Miss Marple. Sounds perfect!

Stephanie Jane--this really was an enjoyable performance. Quite a good cast all round.