And Then There Were None (audionovel) 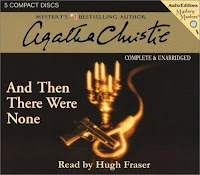 Well, here it is and it is a honey. Imagine ten people, not knowing each other, not knowing why they were invited on a certain island house-party, not knowing their hosts. Then imagine them dead, one by one, until none remained alive, nor any clue to the murderer. Grand suspense, a unique trick, expertly handled. [Kirkus Reviews, Feb. 1 1939]

And Then There Were None (1939) is one of Agatha Christie's most famous mysteries and the plot is well-known among mystery fans. It regularly makes "Best Of" lists--from Best Crime & Mystery Novels to Best Books of the 20th Century to PBS's Great American Read. One would think that everyone would know the story by now. But I regularly find people in my life who don't--who have never read it. Or seen one of the adaptations. Or listened to it on audio. And every time I convince one of them to give it a try, I make the same offer. If they can read it and honestly tell me at the end of the book that they figured it out before the grand reveal...then I will buy them dinner at any restaurant of their choosing. Over 30 years of periodic offers and I have not had to pay up once. Dame Agatha was that good at what she did.

And even though I have read it (more times than I can count). I never get tired of reading/watching/listening. This time around I spent several trips to and from work listening to Hugh Fraser, of Hastings fame in the Poirot mystery series with David Suchet, narrate this ultimate tale of diminishing returns. Fraser does an excellent job voicing the characters and adding just the right dose of suspense to the telling. I really got swept up in the story and it was almost as good as if I were reading (listening) for the first time. ★★★★★ for both the mystery itself and for the audio edition.

**********
Finished 8/2/19
Deaths = 11 (4 poisoned; 1 strangled; 1 stabbed; 2 shot; 1 drowned; 2 hit)
Caused by our current murder victims (10+): 2 run over; three neglect/medical malpractice; one shot (war); two drowned; one hung; one overdose [and a bunch of unnamed natives that Philip Lombard left to die in the jungle]
Monthly Motif: Transportation plays important role. (You bet it's important. Since the boat doesn't come back when expected, these victims-to-be can't get off the island and avoid their fate.)

This is an enjoyable book and I recently read it again after a lapse of many years. You may also enjoy The Invisible Host by Gwen Bristow & Bruce Manning (1930) which has a similar setup, in which eight people receive identical anonymous (from 'your host') telegrams inviting them to a posh New Orleans party; then told they will be picked off one by one.

Rick: I've read The Invisible Host...in an edition titled The Ninth Guest after the movie version's title. Have you ever seen the movie? It's pretty good as well.

I have not seen the movie yet (1934!) but I just checked Amazon, they have it for $5.99. I am supposed to get a gift card from them for reviewing swimming pool filters (!) so maybe I will add it to my cart!

Also The Invisible Host was a Mystery League title.