I'm still running a bit behind on reviewing and summing up--but I'm getting better. So...here is my October wrap-up post and my contribution to Kerrie's Crime Fiction Pick of the Month.  I'll also be handing out the coveted P.O.M. Award for the best mystery. So, here's what happened here on the Block in October.... 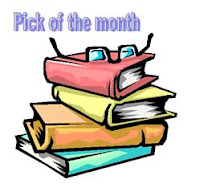 AND, as I note each month, Kerrie had us all set up for another year of Crime Fiction Favorites. What she was looking for is our Top Mystery Read for each month. October was all mysteries all the time--quite fitting for Halloween season. Let's see who the top star-getters were this month....
Night Walk by Elizabeth Daly (3.75 stars)
Sherlock Holmes & Mr. Mac in: The Affair of Lady Westcott's Lost Ruby & The Case of the Unseen Assassin by Gary Lovisi (4 star)
Death in the Doll's House by Hannah Lees & Lawrence Blochman (3 stars)
The Sound of Murder by John & Emery Bonett (4 stars)
Case with Three Husbands by Margaret Erskine (3.5 stars)
Casebook of the Black Widowers by Isaac Asimov (3 stars)
Ghost of a Chance by Kelley Roos (3 stars)
Fire Will Freeze by Margaret Millar (3 stars)
Blue Ice by Hammond Innes (3 stars)

Both Sherlock Holmes & Mr. Mac by Gary Lovisi and The Sound of Murder by John & Emery Bonett have taken top honors in October with four stars each. Lovisi's book gives readers a couple more stories featuring Inspector MacDonald (introduced in The Valley of Fear) collaborating with Sherlock Holmes. They investigate a missing Ruby and the man who can shoot without being seen. The Sound of Murder features Inspector Borges of the Barcelona police who finds himself on a busman's holiday when he visits his good friend Sir Otto Graffham in London and a prominent businessman plunges out of his top floor apartment in the grand Termini building. Each of these books are highly entertaining and worthy contenders for the P.O.M. Award, but the judges must come to a decision....And the winner is..... 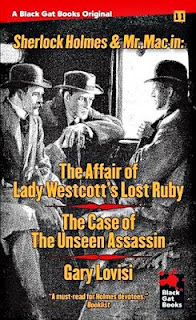 Lovisi has obviously done his research before writing these stories--both historical research of the Victorian era as well as having a genuine understanding of the Doyle characters and style of writing. There are a few instances where the reader is aware that these stories spring from a modern pen rather than from Doyle himself but overall the Holmesian aura is very genuine. Lovisi fleshes out the character of Mr. Mac and makes him a worthy detective to work with Holmes. Two highly entertaining mysteries in the Holmes tradition. 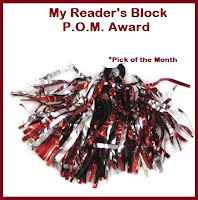 Freda: If I don't read about 20 each in NOvember & December, I won't get my Mount TBR Challenge completed :-( That would make the first time I hadn't completed one of my own challenges....