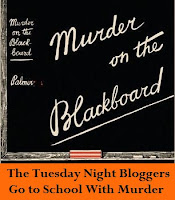 School may be getting out for the summer, but the Tuesday Night Bloggers are donning their academic robes and enrolling in a month of sinister summer school. Throughout the month of June our group of Golden Age Detective aficionados will be taking our examinations and writing papers on the dastardly deeds of academe. Academic mysteries are one of my favorite sub-genres of the field and so I will be collecting the papers here at the Block. If you'd like to join us for a month of academic mysteries, please stop by every Tuesday for group discussion and I'll add your posts to the list. We focus on the Golden Age of crime fiction--generally accepted as published between the World Wars, but everyone seems to have a slightly different definition and we're pretty flexible.

This week's Star Pupils and their essays:

Brad at ahsweetmysteryblog: "Letter to Teacher: Learning About Shin Honkaku"
Moira at Clothes in Books: "Visiting Academics & a Venture to America"
Kate at crossexaminingcrime: "Death in the Quadrangle (1956) by Eilís Dillon"
JJ at The Invisible Event: "The Light & Shade of Gervase Fen"
Helen at Your Freedom & Ours: "Gervase Fen Makes His Appearance"
Bev at My Reader's Block: "Murder in Any Language"

Red Herring #6: Cat Among the Pigeons by Agatha Christie
Bonus Common Theme: Three academic mysteries that do not include a murder. [I realized after the quiz was posted that I had misread Moira's review of The Clue in the Castle. I thought the only death involved there was manslaughter. I have therefore decided to award full credit to anyone who chose a different title and who submitted a bonus point common theme explanation.]
Match Game
1. Hildegarde Withers = The Puzzle of the Red Stallion
2. Gervase Fen = Holy Disorders
3. Adam Ludlow = Death over Deep Water
4. Professor John Stubbs = Unholy Dying
5. R. V. Davie = Death's Bright Dart
6. Ed "Jupiter" Jones = Harvard Has a Homicide
7. Hilary Tamar = The Sirens Sang of Murder
8. Andrew Basnett = A Murder Too Many

I had seven pupils show up for class and complete the pop quiz. The average score out of a possible 20 points (including full bonus points) was 9 with a range from 6 correct to 15. Perhaps your instructor made the quiz a bit too challenging....

I have no idea how I got the highest score. I may have chosen the right book that didn't belong in each group but in many cases I had a completely different reasons than those you had in mind. I thought since the puzzle incorporated the academic theme all of the linking elements must have to do with the book's content. Never entered my mind to look at writing teams or pseudonyms.

You got most of the answers right. And as far as the bonus points go--You did correctly identify a couple of the common factors (or close enough) and I gave half-credit for common threads which made sense to me as long as the correct book was identified.