For our 25th Wedding Anniversary, my husband & I took another (short) trip on Route 66 in Illinois. Brad, who doesn't understand my need to buy enough books to stock a library, indulges me and told me that for our anniversary I could have a blank check to use at my favorite used bookstore, Books on the Square, in Virden, Illinois. I came home with 34 books (well 29 from Books on the Square and 5 from various antique malls that we stopped at). After all the modern 25th Anniversary is Books, right? Actually...for me...every year is Books.

Here's a run-down of the books that came home with me: 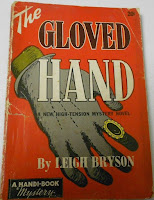 You Can't Keep the Change by Peter Cheyney [Avon, pocket-size]
Only the Good by Mary Collins [Bantam, pocket-size]

Give 'Em the Axe by A. A. Fair [Dell Mapback]
The Big Clock by Kenneth Fearing [Bantam, pocket-size]

All for the Love of a Lady by Leslie Ford [Bantam, pocket-size; a near-fine copy to replace a rather battered one]
The Lady Regrets by James M. Fox [Dell Mapback]

The Ship Without a Crew by Howard Pease [Scholastic, pocket-size]
The 24th Horse by Hugh Pentecost [Popular Library, pocket-size]

Happy anniversary! What a lovely haul of books. We are so lucky to have such understanding husbands. Mine reads a lot too but believes you should borrow what you read from the library. What a quaint idea...

25 is the silver anniversary, isn't it? Congrats, anyway.

Some of those digests are very scarce -- the Handi Books, the Black Knight, and the Koehler book from Bleak house. Very nice haul! I don't think I've ever seen that paperback edition of MAD HATTER MYSTERY. Quite uncommon! I really like the Pentecost book cover. I would've bought that in a second. I have yet to read any of his novels, but used to read all those Pierre Chambrun stories in EQMM when I subscribed to it back in my high school days. Happy reading!

Happy Anniversary! There is nothing better than a book- buying spree as a gift. I love your huband's thinking! You picked up some real goodies!

John, I know it's officially Silver--but you know that for me books are more precious than silver (or gold...). :-)

Great books and covers the lot of them 0 but well done on the anniversary Bev - hope you are having a marvellous silver time!