The Seven Wonders of Crime: Review 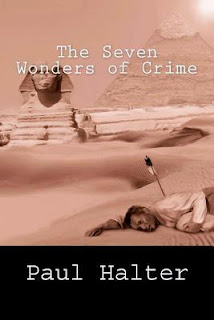 I was really looking forward to The Seven Wonders of Crime (1997) by Paul Halter. I got my hands on this book after reading reviews of his work over at the Puzzle Doctor's In Search of the Classic Mystery Novel. Halter has been compared to John Dickson Carr for his abilities with locked room or impossible crime novel--and that made me quite giddy. I always enjoy a good impossible crime. I have to confess that I was pretty disappointed by Wonders. The premise is quite interesting. An "artist of crime"--so dubbed by our hero Owen Burns, whose vanity and opinion of himself puts Holmes to shame--has set out to commit the titular seven wonders of crime. The murderer has concocted seven impossible crimes based on the Seven Wonders of the Ancient World, so their artistry is two-fold: by creating the appearance of impossibility, whether it be the war-hardened soldier who dies of thirst with a glass of water right in front of him or the stabbing death of a man in a pergola surrounded by mud that shows no footprints but his own or the woman killed by a flowerpot apparently hurling itself off a high arch and landing on her head; and also by replicating in some form the details of the seven wonders. That's really quite an interesting premise for a crime novel.

My difficulties with the novel are several. Owen Burns is really quite insufferable. He is more full of himself than Sherlock Holmes. He goes on and on about his brilliance, how incompetent the police are, and what a dim bulb his friend (and chronicler) Achilles Stock is. In the Holmes novels, there are moments of warmth from the Great Detective--moments when the reader can tell that there really is some affection between the two friends. The few times Burns makes comments that are, I believe, supposed to indicate how valuable Stock's comments are (in the line of Holmes to Watson:  “It may be that you are not yourself luminous, but that you are a conductor of light. Some people without possessing genius have a remarkable power of stimulating it.” ), the compliments still come across as much more backhanded. I can't for the life of me figure out what keeps Stock hanging out with Burns--he says several times that Burns has "crossed the line" with a comment and, yet, he keeps coming back presumably because, like a moth with a flame, he can't stay away from the illumination.

Except...to my mind Burns isn't particularly brilliant in this outing. Seven people die--quite horribly. Burns immediately spots what's going on, that is--the link to the seven wonders. But that seems to be the extent of his brilliance. He meets the possible suspects (and there aren't a whole lot of them to choose from...) and still has difficulty pinpointing the culprit and putting a stop to the killing. He couldn't figure out where the sixth murder was going to happen even though I (and, quite honestly, even though I read mysteries by the score, I still miss clues all over the place and don't make connections that many of my more learned friends out here in the internet do)--I spotted where it was going to happen as soon as the taunting message showed up and I had my eye on the culprit quite early on. And, finally, he seems genuinely shocked when the culprit admits their crimes and the purpose behind them. ("Owen deathly pale by now, waited a long time before turning his gaze from the setting sun." AND "...[the] words echoed strangely in Owen's ears. They had the ring of truth, yet his heart rejected them. His brain felt as if it were boiling, like the sea touched by the sun."). If he really had solved the crimes, then he should have had a nice sit-down session with Stock and explained the whole thing to his dim-witted friend. Instead he seeks out the culprit and, apparently, has details of the crime explained to him. There are moments when Holmes berates himself for being slow-witted, but I seriously think he would have figured this one out long before Burns and possibly saved a few lives in the process.

From what I gather from friends and other reviews on the internet, this isn't Halter's best work and that there are much better examples of his expertise with the impossible crime. The premise here was intriguing enough for me to give his work another try and to warrant giving the book ★★. I hope to enjoy my next taste a bit more. And would love to hear what you think is the best of his work to give me an idea of what might suit me better.

Labels: 100 Plus, Books of Summer, Mad Reviewer, Mount TBR, My Kind of Mystery, Outdo Yourself

And would love to hear what you think is the best of his work to give me an idea of what might suit me better.

I'd say "The Fourth Door" which I regard as his best work or "The Demon of Dartmoor" which may be his most palatable to an English-speaking audience. Both are Burns-free.

Be warned however that Halter is an acquired taste, and a French writer first and foremost that doesn't always play by Van Dine's rules. You may want to read this letter from a devoted anti-fan that I published on my blog some years ago:

Thanks, Xavier. I have seen The Fourth Door mentioned quite often. I'm not (I don't think...) put of by the French nature of his writing. There are several French authors whose work I enjoy--including Fred Vargas. And I didn't get the sense of real difference that I do with Georges Simenon (I do have trouble reading his work.) My real difficulty with this one is the build-up of how brilliant Burns is supposed to be and the, to me, obvious association of Burns with Holmes. Holmes pretty well lives up to his "far more brilliant than the police" reputation from the first story I ever read about him. Burns just doesn't in this novel.

Really enjoyed your review Bev, not least because I think we found quite similar things to criticise. I am now very curious about THE FOURTH DOOR, DARTMOOR and DEATH INVITES YOU as they seem to have been met with a great deal of approval among our blogging brethren :)

Bev, I tend to grumble about Halter a lot after three tries, and yet I seem to be a glutton for punishment. I did not love The Fourth Door, but I did like The Demon of Dartmoor. I would avoid The Invisible Circle, as the premise doesn't build well and the ending is ludicrous. But I will say, based on Demon, that the relationship between Halter's "modern" team of Alan Twist and Inspector Hurst is quite delightful compared to what you described of Owen Burns and his flunky. I may have to stick to the Twist novels if I'm going to move forward. Death Invites You seems to be the one indicated as my next try.

Brad, it does look like I need to avoid Burns and try the more "modern" team of Wist and Hurst...

Burns is definitely an odd one, and the nature of his detection can leave something to be desired, but when the puzzles are good enough I think Halter gets away with this (cf. The Phantom Passage, most of The Lord of Misrule). How he comes to the workings of the impossibilities here is a bit ludicrous, I completely agree, and it makes the book an unusual experience that it's difficult to get too enthused about.

Hurst and Twist may well be more your type of poison in that case. Death Invites You is fabulous, and I have a lot of time for The Tiger's Head and it's multiple threads...all, thankfully resolved more satisfactorially than this. If you're not entirely discouraged by this experience, I'd love to see what you make of any future Halter books. And thanks again for getting involved today - I know how mountainous your TBR is, and appreciate you jumping the queue on Halter's behalf!

Thanks, JJ. I'm not completely put off. I have a lot of respect for folks like you and the Puzzle Doctor, so I'm definitely willing to give Halter's work another try (or two). I do hate putting out fairly negative reviews for events like this, but a girl's gotta do what a girl's gotta do (especially if I want my review records to be accurate). Thanks for putting this together!

I will definitely pass on this one myself.

Well, you were warned. I detested this book and gave up on Halter after reading it. I thought the murderer and the motive were obvious by the third or fourth murder. I think the comparisons to Carr are hyperbolic. Halter is much more artificial than Carr who at least a has a sense of humor to keep me entertained when the plotting becomes mechanistic or fanciful. Also Carr excels at creating eerie atmosphere in most of his books whereas I think atmosphere is completely absent in Halter's books, especially those set in the 19th century. I'm not a fan of the translations either which may be the big problem for me.