Top of the Heap: Review

A member of San Francisco's upper class comes to the offices of the Cool & Lam Private Detective Agency. John Carver Billings II hands them a retainer and a bonus of five hundred dollars if they can track down a couple of women who can provide him with a nice alibi. It seems he walked out of a restaurant with a redhead who belonged to a local gangster and the redhead walked out on him. So, he decided to find another date and wound up with a pair--one blonde and one brunette. His problem? The redhead didn't just walk out on him. She has disappeared entirely and he doesn't want to be blamed for her vanishing act. The lovelies that he spent the night with could prove that he was otherwise occupied...if they could be found.

Bertha Cool, head of the agency, is eager to let Donald Lam earn the money. But Donald smells something fishy. When earning the bonus proves to be just a little too easy (Donald knows he's good...but not that good), he knows he was right. And when he decides to dig deeper to find out just why Billings wanted Cool & Lam to "discover" an alibi that has obviously been pre-arranged, he finds himself on the wrong side of law, on the wrong side of the powerful Billings family, and on the wrong side of Bertha Cool. One murder, one hit-and-run accident, one run-in with the mob, and one gold mine later, Lam has put the pieces together and is able to present Bertha with a bonus that even she could never have dreamed of....

Top of the Heap is the thirteenth entry in the series by A. A. Fair (aka Erle Stanley Gardner, better known for his Perry Mason books). In many ways it follows what seems to be the typical Cool and Lam pattern--Bertha wants money and lots of it; client offers said money; Donald gets to do all the work; Bertha waits to scoop up the cash and share it out. I don't think these are books that I would want to read too close together. The one bonus here is that Donald really gets to show Bertha what he can do. When she decides that he has screwed up the case and cost them their retainer, he sets off on his own to get to the bottom of things and does so in style. It's absolutely worth it to see him stroll into the office (through a door where Bertha has scraped his name off the glass) and present her with the bountiful fruits of his labor. It's amazing how fast her fire-breathing changes to honey-toned appreciation. Enough dollar signs will do that, I guess.

Overall, a decent read in the pulpy private eye world. I particularly like Donald--he's quick on feet, quick-witted, and quick with a snappy come-back. ★★★

This fulfills the "Detective Team" square on the Golden Vintage Bingo card. 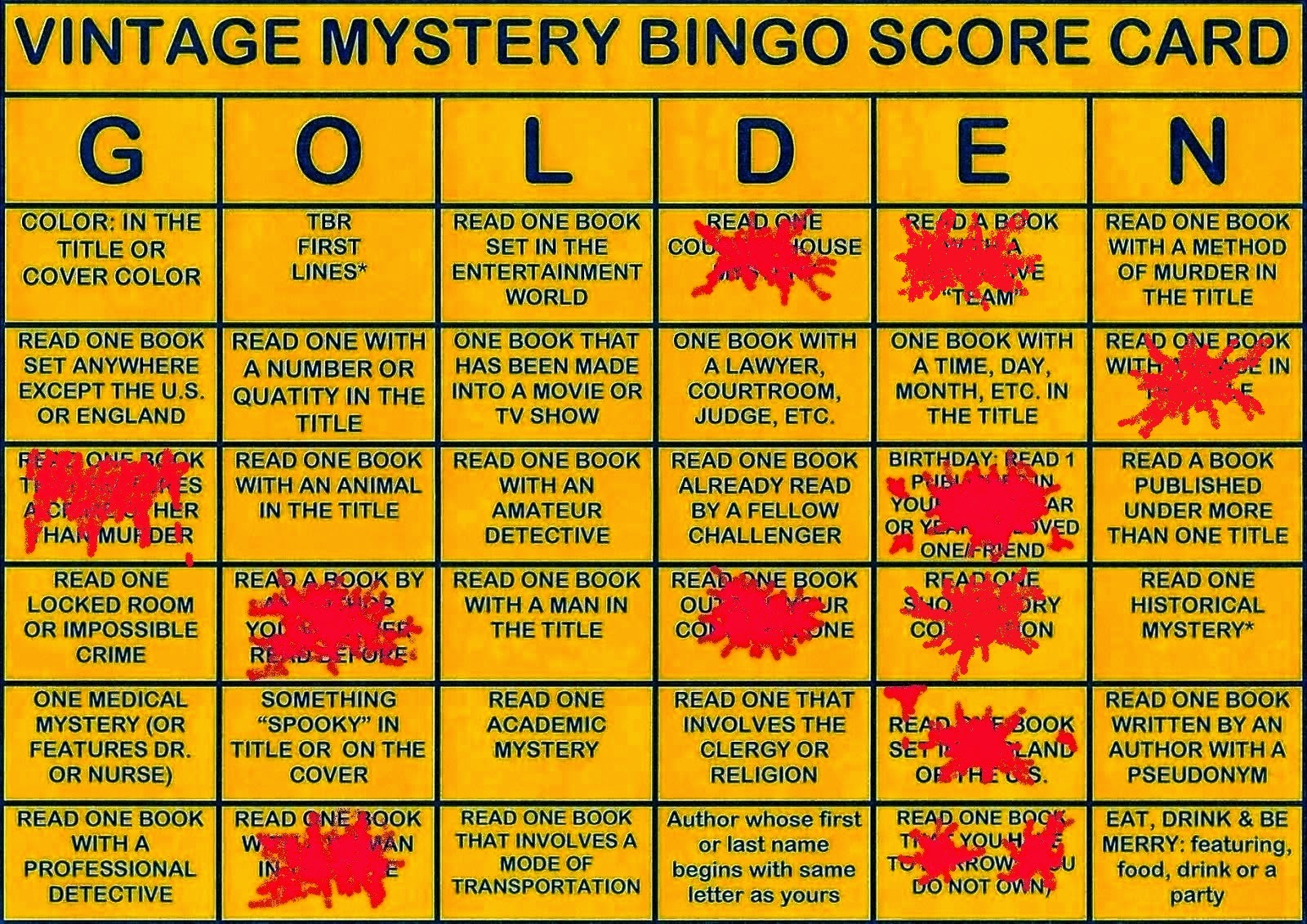 How could anything possibly go wrong?! LOL ;-)
Sounds like a fun story!
Great review!

OK, I'm going to confess something: I have almost all the A. A. Fair books in Dell mapback editions and a few hardcovers, but... (you know it's coming) I haven't read one of them. I have this one, too. I think it's probably the easiest to find since it was reprinted by Hard Case Crime several yeas ago. I'm wondering which one I should choose as my first. Each time I plan to read BATS FLY AT DUSK I get sidetracked by some other book. Have you read others? Any one stick out as the best so far for you?

John, these are fairly middle of the road for me. The whole private eye thing isn't really my ideal, so they don't tend to send me into raptures. Bertha and Donald are enjoyable as a team--in small doses. I've only read three and rated the debut novel (The Bigger They Come) at 2 1/2 stars for a bit of a bumpy ride in comparison to the later ones and I rated the other two at three stars. It's a toss-up between this one and You Can Die Laughing (which was the first one of the series that I read). Each have their points. I think the relationship between Bertha and Donald is highlighted better in Laughing, but as I mention in this review, I liked how Donald really shows Bertha what he can do in Top of the Heap.

I keep meaning to try this series but the one I picked up, THE COUNT OF NINE, is apparently a poor place to start so I have yet to give it a go!

I have one book in this series, but have never read it.

Top of the Heap is worth reading, I think. The murder is a relatively small part of an intricate scheme, which is interesting as scams go. Gardner like to describe process, how plots worked. As the running joke, Bertha Cool plays the comic miser like Uncle Scrooge and Mr. Krab. Her hard-charging ways comically contrast with ex-lawyer Donald Lam’s subtle questioning of persons of interest and cunningly holding off cops bent on putting him in the hoosegow. Another constant is that because gentlemanly Lam is such a considerate listener, all the female characters fall like dominoes for him in spite of his short stature and poverty due to Bertha paying him so little. The Lam-Elsie Brand interplay is pretty funny and adult and bold, much moreso than Perry-Della interaction.