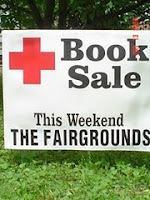 I have been waiting impatiently for this year's Red Cross Book Sale--waiting since October 28, 2012. Yeah, that would be when I loaded up at the sale last year.  I had quite a year in 2012--bringing home a record number of 55 books.  Some of my friends out on Facebook had a friendly little wager going on--how many books I'd snag this year.
At first, it looked like Ellen was going to be the winner (70). I walked in, headed straight to the first hardback mystery section and promptly filled my little rolling carry-all bag (thanks Kathy...several Christmases ago) a little over half-full. There were three more hardback sections, five paperback mystery sections, and the clearance section (where vintage mystery gems often lurk) yet to go. Things fell off after that...and I was beginning to think that Monica might be right (60). I might just barely beat my last record. But.....unless I do another round on Sunday (half-price day)...it looks like Ryan pretty much nailed it. 48 books and 5 Christmas CDs. Fewer books...but A LOT of vintage authors I've been looking for. In reprint form, rather than vintage copies , but I'll take what I can get. We'll call a betting winner once we see if I resist going back on Sunday.....
I was VERY tempted by a 1st Edition, dust-jacketed Mr. & Mrs. North book by Frances & Richard Lockridge.  But I talked myself out of it....I would have had to put over half of the other books back in order to justify it.  But...who knows.  Maybe it's still there on the shelf and will call my name until I come back out on Sunday.
But here is this year's haul so far:


Anybody else want to take bets on whether I go back?

You should definitely go back. Sounds like they have lots of good books. I cannot believe that first ed. Frances Crane book. Just wonderful. I just went to a big sale like that and I went three times and bought around a hundred books. I will have to get myself a rolling book bag.

I'm hoping I stay the winner! And I'm glad you got so many great books.

Wow, great loot.
You're going to love The Man Who Loved Books Too Much by Allison Hoover Bartlett, I know I did http://manoflabook.com/wp/?p=63

Nicely done! You had some good book karma with the Lockridge and Crane books. I bet you went back for the Lockridge book. I would! Joe and I had fun three years ago when we went to this a sale for the first time. All book sales on hold for a while, sadly.

I read The Man Who Loved Books Too Much by Allison Hoover Bartlett when it first came out. Was fascinated by the whole story of that forger/thief. You'll love it, I'm sure.

John--I didn't go back for the Lockridge (sadly). I'll probably kick myself for that periodically. But--the two Crane books were/are terrific finds. Sorry to hear that book sales are on hold for you--hope all is well.