Peril on the Screen: The Haunting

Back on September 24th I read The Haunting of Hill House by Shirley Jackson.  It had been billed as "super scary" and a book that "scared the crap" out of more than one of my blogging buddies.  I didn't find it to be quite so scary to read (click on title above for my review).  So I decided to give the 1963 movie adaptation, The Haunting, starring Julie Harris, Claire Bloom, and Richard Johnson a try as another entry for Carl's R.I.P. event. 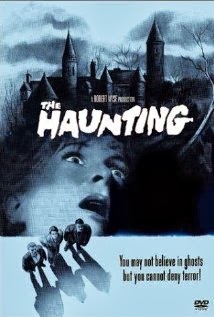 I found Nelson Gidding's script and Robert Wise's direction to be much more affecting than reading the novel.  While, the script does remain pretty faithful to the novel, Gidding read the book as more about mental deterioration than the supernatural and, even after a meeting with Shirley Jackson in which she stressed that the book was, indeed, about the supernatural, Gidding kept elements of mental breakdown in the story.  The viewer is left with even more definite questions about Eleanor's stability in the movie than in the novel.  Her mental fragility is exquisitely portrayed by Julie Harris--and even when the scenes make it clear that all members of the "ghost-hunting" party have experienced a taste of the other-worldly, we are tempted to believe that it's all in Eleanor's mind. 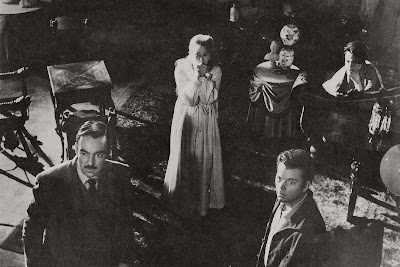 The cast, director, and crew all work together to create a perfectly spooky film.  A film that is regarded by many as the best, most unsettling horror film of all time--and has made the top twenty of many lists of horror movies.  I much prefer my spooky films in black and white with the atmosphere building up most of the suspense.  This is the way to scare me--no blood and gore, no crazy, slashing psycho-killers.  Everything from the lighting, to the music, to the pounding, to the indistinct voices, to the door that appears to "breathe" works together to thoroughly creep the viewer out.  When the trap door opened above the stairway balcony, I thought I was a goner.  A marvelous "thrills and chills" movie that did an excellent job with Jackson's book.


(also viewed for the Book to Movie Challenge--book review linked above)
Posted by Bev Hankins at 10:22 PM

That's so interesting Bev as I had exactly the same experience, much preferring the film - and certainly if you compare this with the remake you can see just how subtle a movie it is - I think it also benefits greatly from Wise's collaboration with writer-producer Val lewton in the early 40s on such spooky and restrained horrors like CAT PEOPLE and BEDLAM.

I'm so glad you enjoyed the movie, even if you didn't like the book as much. I love them both, and they both scare me. One aspect of the movie I like is the way it's filmed, almost all the shots are from an odd angle or the shot is framed off center, which slightly distorts the whole picture and adds to the atmosphere.

Julie Harris is what makes this movie the classic that it is. (RIP Julie, who pased on a few months ago) She deserved a slew of awards for that performance. I still have vivid memories of watching this movie the first time decades ago when I was a teen.