The Silence of Herondale: Review 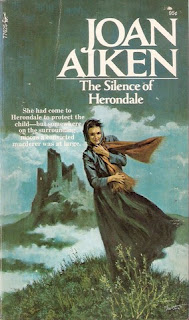 The Silence of Herondale by Joan Aiken is one of my rare forays into the world of gothic suspense mysteries.  I don't do these often....and I suppose there's a reason.  They're just not my thing anymore.  I went through a nice little phase of them back when I was a pre-teen and teenager when thrilling to the mysteries of isolated damsels in distress and dreaming of the brooding, irritable lord of the manor who's really a romantic sweetie was just the ticket.  I certainly read my share of Victoria Holts and Phyllis A. Whitneys....

This one as you can see has the obligatory dark, castle-like manor house and the misty moors and the damsel in distress--windblown and all--on the cover.  And, of course, she takes on the job of governess/teacher to a thirteen-year-old play-writing prodigy who winds up being co-heir to the castle-like manor along with the brooding irritable lord of the land.  There are evil doings afoot--attempted murder by pump-weight and faulty car brakes, escaped convicts roaming the moor, greedy relatives, and dour villagers galore.

Deborah Lindsay (said damsel in distress) has come to England from Canada to escape memories of a town where her parents died as well as memories of a love affair gone wrong.  She had been a teacher and is now looking for work.  She applies for the job of governess/teacher to Carreen Gilmartin, the aforementioned play-writing prodigy.  Carreen has been under the care of her aunt Mrs. Morne.  Deborah no sooner takes the job than Carreen disappears from the hotel where they are staying.  She goes off in search of her Uncle John--who she hopes will help her force Mrs. Morne to allow her a break from play-writing.  Deborah is sent to track her down. But Uncle John is dead and Herondale Hall (the family home) is empty.  Carreen's cousin Jeremy arrives (the brooding lord of the manor) and Mrs. Morne and Carreen's entourage follow.  The will is read--revealing that Uncle John has left Herondale Hall and most of the family fortune to Carreen and Jeremy.  That's when all the evil doings begin.

As far as I'm concerned, it wasn't a great feat of deduction to figure out who was behind all the evil doings.  No great mystery here.  Fortunately, the characters of Deborah, Jeremy and Carreen, as well as some of the supporting villagers, are interesting enough to carry the story.  Great atmosphere and the characterization make for a decent three-star read.

I love that cover...and I am a huge Victoria Holt fan as well!

It still amazes me that what amounts to one of the most formulaic types of genre fiction made so much money for many writers, agents and publishing houses for nearly three decades. These neo-Gothics still fascinate me. Occasionally, I come across one that breaks the mold whether it be in terms of an exotic setting (non-UK country/town) or the addition of arcane legends and folklore. And I still collect Gothic hardcovers with DJ art by the prolific Charles Greer. They were often gorgeous examples of modern illustration.

John: I think a lot of people really go for formulaic--they like to know what to expect. I think of all the cozies that are out now...murder with knitting; murder with dogs &/or cats; murder & scrapbooking; murder & book clubs. There's a niche for everyone. I'm not knocking them...I can go for a good cozy formula every now and then myself--but I can't read dozens of them in a row like so many people can. I think it's the same with Gothic suspense/romance and romance novels in general.

I still kind of like this stuff as long as the romance isn't so heavy it takes over the book.